The Wuhan Lab Leak: the conspiracies, the cover-ups and the fatal consequences
Barry O’Halloran

We are living through one of the most important events of the 21st century. The Great Pandemic, its origins and the resultant geopolitical fallout will affect our lives in ways that we are only now beginning to comprehend. The Wuhan Lab Leak: the conspiracy theories, the cover-ups and the fatal consequences explores the origins of the pandemic and reveals how we arrived at this critical conjuncture in world history.

The book is a contemporary historical account of this century’s single biggest catastrophe. It lays out the detailed evidence for what happened and draws important conclusions regarding its most significant consequences. The pandemic has completely upended almost three decades of a flawed and naïve Western approach to China. Global international relations have been changed irrevocably by the pandemic

The single most controversial unknown of this global disaster is where the virus that caused it came from. Through a careful analysis of both Chinese and Western sources, the book recounts the incredible circumstances that has led to the worst infectious disease crisis in 100 years.

It recounts the shocking story of how China covered-up, supressed scientific information, and deliberately lied about what was happening. And how the World Health Organisation willingly went along with this subterfuge by deliberately parroting what China was telling it. As a result, critical time was lost and a highly infectious disease that could otherwise have been contained as a local epidemic became a global pandemic.

It details the extraordinary saga of how the French government built the Wuhan P4 biosecurity lab and then abandon it because of Chinese dissembling. A state-of-the-art biocontainment laboratory, built and paid for by the West, was effectively handed over to the People’s Liberation Army.

As a consequence, this sophisticated high-tech biolab ended up being run with insufficient and inadequately trained staff. As late as 2018, secret cables from US embassy staff in Beijing were sent to the State Department highlighting the potential dangers of this state of affairs. The US stepped in to fill the enormous knowledge, technology and training gap left by the French withdrawal and poured millions into the Wuhan Institute of Virology.

Gain-of-function, the gene-editing of lethal pathogens to make them even more dangerous was banned by the Obama administration in 2014. However, with US funding these very controversial experiments continued in Wuhan with the gene-editing of bat coronaviruses – in direct collaboration with US universities and scientific organisations. These dangerous experiments were carried out in Wuhan’s low-level security P2 and P3 labs – with the same biosecurity levels as a dentist’s surgery.

Could the unthinkable have happened? Did a bat coronavirus that was deliberately manipulated to be more dangerous for humans escape from a lab in Wuhan? Was this genetic manipulation carried out in a Wuhan laboratory with funding from US taxpayers? Was this the virus that caused the Great Pandemic?

Since the outbreak of this pandemic, the CCP has pursued an extraordinary and relentless campaign of obfuscation, dissembling, cover-up, and, when required, economic blackmail in order to forestall, divert, or otherwise sabotage any possibility of an independent forensic investigation into the origins of the virus. The CCP’s extreme behaviour in this regard gives rise to one remaining question of the utmost significance. And the answer requires no special expertise or scientific knowledge, just some common sense: What are they trying to hide and why?

Even more shocking, the book will explain how leading US and international scientists conspired to cover up what they really thought about where the virus had originated. In private, these leading scientists believed that a lab leak was ‘most likely’, yet in public they claimed that the lab leak theory was a ‘conspiracy’.

In another case of ‘follow the money, it will reveal, for the first time, how Dr Fauci’s control of the allocation of billions of dollars of research funding to many of these same scientists gave him enormous control over what they could and could not say. All of this constitutes a shocking indictment of how the scientific establishment functions, about which the general public is largely unaware.

Even the US intelligence community was split on the issue of a lab leak. There was considerable resistance to even investigate it. Why? A secret State Department memo says the quiet part out loud: because it would open up ‘a can of worms’. The sensational implications are that US government grants provided by Dr Fauci may have funded the creation of a virus that escaped from a laboratory in Wuhan to infect and kill millions?  Are we looking at the biggest cover up in modern history?

In one of its most important conclusions the book asks; is China’s belligerent behaviour throughout the Great Pandemic pushing the world relentlessly towards the abyss? Read it and make up your own mind. 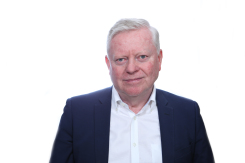 Barry O’Halloran has worked as an investigative television journalist for 15 years making current affairs documentary films. One of his  investigations – into a mother falsely accused of murdering her baby – led to a book, Lost Innocence: the Inside Story of the Kerry Babies Mystery.   He has degrees in economics and politics, French and Renaissance studies and a PhD in Classics at Trinity College Dublin. His thesis was published as a book in 2019 by the European academic publisher Brill: The Political Economy of Classical Athens: a naval perspective, For ...
More about Barry O’Halloran