Whitehead’s Grove opens during a family holiday in Mallorca, when eleven-year-old Beazie and her brothers are summoned to what they assume will be a dressing down for some infraction. Instead, their mother says, ‘Daddy’s died,’ (while grouse hunting in Scotland.)  For the next twenty years the family never discusses this cataclysm. Beginning with a Chelsea childhood that is materially privileged and emotionally desolate, each chapter paints a specific moment in time with vivid emotional detail and compelling candour.

Unequipped to process her grief alone, compounded with emotional deafness of her mother’s evangelical Christianity, during adolescence Beazie develops unhealthy coping mechanisms, including bulimia. Whilst at university, she finally asks for help and is introduced to a 12-step fellowship. Her mission to overcome her pain and insecurity has begun, though not very promisingly, and a wide range of therapists follows, with varying results.

At 24, Beazie falls in love with and marries a wealthy older man and who persuades her, for the least romantic of reasons, to move to Thailand. Between a luxury condominium and a club called Polo Escape, she enters a new form of loneliness, with no friends or family but numerous “staff” whose ubiquitous presence poses its own strange challenges. She and her husband have identical twin girls and the constant presence of nannies adds to Beazie’s feelings of isolation and inadequacy as a new mother.

Beazie and her husband become increasingly estranged as his very English incapacity for emotional intimacy and focus on “lifestyle” makes her feel increasingly alone and desperate; she is haunted by the question whether her unhappiness is because she is fundamentally flawed. The problems between the couple culminate in an incident that is labelled as abusive and leads to her being sent to a treatment centre in Arizona.

Beazie returns to Thailand having made the decision that she will fall in line and try to be the emotionally minimalist socialite she is expected to be. Ultimately, however, suppressing her true nature isn’t sustainable and when her jewellery business begins to take off and her confidence increases, Beazie realises that she can’t continue in a life that makes her feel unknown and alone, and she makes the decision to leave her husband in order to find out who she really is.

Whitehead’s Grove combines universal themes – love, loss, personal development – with an unflinching look at how a life of financial and social privilege, whether in southwest London or expat Bangkok, can rob individuals, especially girls, of the robustness that every person requires to be true to themselves and to even to have a sense of themselves to which to be true. Whitehead’s Grove also shows how forms of Evangelical Christianity, 12-step programmes and other forms of treatment can further harm already vulnerable people. 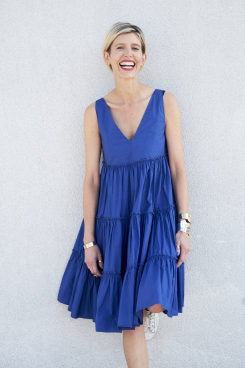 Beazie Nickols lived for the first 24 years of her life at 7 Whitehead’s Grove, around the corner from Sloane Square. She went to school at Frances Holland in Chelsea, studied theatre at Warwick University and became a publicist for Hollywood actors, travelling between London, New York and LA.   Having always been interested in design, in 2002 Beazie began working in the heart of London’s gem district, in Hatton Garden, learning about rare gemstones and designing jewellery. In 2005, Beazie moved to Bangkok, the gem capital of the world, and in 2006, she started her first ...
More about Beazie Nickols