One morning I was ambushed by the fantasy of leaving all the complications of work and family life behind and setting off alone on a spontaneous hitch-hiking adventure as I had in my twenties. But the elemental challenge I needed turned out to be just a 30 minute walk away from home behind the big green door of the Highgate Men’s Pond on Hampstead Heath.

Cold Water: The Swimmer’s Tale is a dive into the history of this place reaching back as far as the last ice age and charting the impact of the pandemic on its long history as a symbol of freedom. It’s also the story of an attempt to swim in the same pond every day for 365 days even as the wind howls, snow falls and icicles form on the steps down into the water. It’s a vivid portrait of a unique place and its community of men, ducks, geese, gulls, herons, pike and the occasional curious dog. The men’s resilience, eccentricity and a certain homoerotic charge are explored with humour and honesty while a deepening bond with nature and its simple pleasures turns into a journey as life-affirming as the open road. 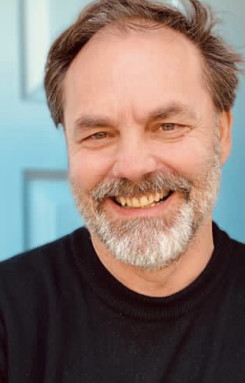 Chris Granlund is a BAFTA-winning documentary-maker. Over the last 30 years he has directed films for the BBC about Pedro Almodovar; Marcel Duchamp; Man Ray; Vermeer; and Salman Rushdie. He has also collaborated with presenters including: Peter Ackroyd; Lucy Worsley; Andrew Marr; Tom Fort; and David Olusoga on subjects ranging from the Biography of London and Andrew Marr’s History of Modern Britain to the History of the World; from a pleasurable drive up the A303 in Highway to the Sun to the exploration of British History’s Biggest Fibs with Lucy Worsley; from a study of the Age...
More about Chris Granlund