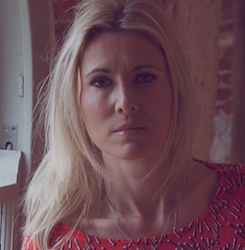 Marni Mulholland was brought up in West London, against a backdrop of punk rock, terrorist bombings, New Romantics and Britain's new affluence. The daughter of Irish immigrants, she was shunned by the English and neglected by a mother was a mentally ill. While girls in pearls were sipping cocktails in Chelsea, Marni was eating from a bin. Homeless, Marni was taken into care where she was groomed into a child prostitute by the social worker in charge. Rehoused, Marni descended into London’s dark underbelly, but through grit and determination reinvented herself, eventually becoming one of those girls in pearls.

After a cataclysmic personal event in 2010, Marni started to keep a diary which developed into her first book.

Marni now lives in London with her husband and two children and is a campaigner for awaremess of child abuse.

Searching for literary agents on the Internet, I repeatedly came across Andrew Lownie’s name. The more I read, the more I wanted Andrew to represent me. It seemed clear he was the best in the business, specialising in delicate content.  I sent an email with the first three chapters of my book and was surprised by an almost immediate response and an invitation to meet him at his charming London office. Andrew is reliable, realistic and respectful and I am very pleased to be represented by him.