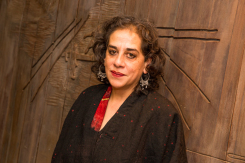 Rasna Warah is a Kenyan writer and journalist of Indian descent and the author of five non-fiction books: UNsilenced (2016); War Crimes (2014); Mogadishu Then and Now (2012), Red Soil and Roasted Maize (2010); and Triple Heritage (1998). Her books on Somalia, War Crimes and Mogadishu Then and Now, examine the impact of war on Somalia’s cultural, political and economic environment by focusing on corruption, both within the aid sector and within Somalia’s fragile government. Her short story, "Have Another Roti", was published in Nairobi Noir in 2020.

Rasna was an op-ed columnist at the Daily Nation, Kenya’s leading newspaper, for eleven years, and has contributed to various national and international newspapers, including the UK’s Guardian newspaper, the East African, South Africa’s Mail and Guardian, and Kenya’s The Elephant online magazine, which she copy edited from 2017 till 2020. Michela Wrong, the British author of It’s Our Turn to Eat: The Story of a Kenyan Whistleblower, has described her writing as having “a rare and valuable combination of qualities: absolute clarity of expression, a keen eye for the lies, contradictions and pomposities of modern society, a driving hunger for justice, and a huge compassion for her fellow Kenyans”.

For over a decade, Rasna worked as an editor and writer at the United Nations Human Settlements Programme (UN-Habitat)’s global headquarters in Nairobi, Kenya. She was the editor and co-author of two State of the World’s Cities reports and edited a quarterly journal called Habitat Debate.

Rasna studied Psychology and Women’s Studies at Suffolk University in Boston, USA, and holds an M.A. in Communication for Development from Malmö University in Sweden.