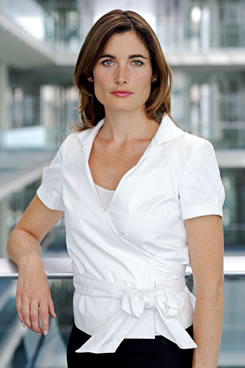 Romilly Weeks is a news correspondent and presenter for ITV News. She recently interrupted her maternity leave to report from Westminster Abbey on the wedding of Prince William and Kate Middleton - interviewing illustrious guests and the newsagents from Kate's home village whom she memorably asked if Kate had any favourite sweets.... Such gems are what you come up with when you are live on air for a six hour stretch.

As Royal Correspondent she covered 5 Royal tours, two weddings and two funerals, as well as reporting every day from the High Court for the inquest into Princess Diana's death. She has interviewed Prince Harry, had Prince Philip eavesdrop on her pondering on the romance in his marriage (which led to an unwitting appearance on Have I got News for You) and cadged a lift in Prince Charles's helicopter in Pakistan.

Before the royal job she was embedded with the British army during the Iraq war and reported from Thailand after the Boxing Day tsunami. She began her journalistic career in radio after a thankfully short stint as an actress.