Defying Gravity  explores the mystery and history of unique, extreme, unintentional and intentional out-of-true structures, demystifying their strange appearance, and giving an explanation for their ‘deformity.’

The Glynne Arms or Crooked House at Himley must qualify as the most crooked brick building in the land, and the crooked spire at Chesterfield the most unintentionally twisted spire in the world. These two main players have fascinating history and mystery to unravel but the supporting cast of lesser-known buildings, which share a structural phenomenon, have many captivating ‘out of true’ tales to tell.

In the crooked houses the phenomenon of balls rolling ‘uphill,’ of ‘sloping’ horizontal tables and ‘vertical’ but tilting walls deceive the eye.

In the peat and salt areas, some buildings have ‘risen’ out of the ground, whilst others have sunk leaving the original surrounding ground levels remaining. Many have not defied gravity and have collapsed or been demolished but their stories endure.

The book examines why towers tilt, even when supported on uniform ground. Or why church spires twist and lean.

The book poses the question - what has caused these extreme effects, and what has stopped gravity having its final say?

Guinness Book of Records diagrammatically presents a number of the most tilted buildings globally, recording their angle of inclination, but only applicants have been included. Other British contenders, described in this book, could certainly apply to become the ‘furthest leaning tower.’

Then there is the strange phenomenon of chimneys, built vertical, which bend into the prevailing wind, defying all logic, and gravity. And the mystery of why this effect is so prevalent in a small area of South Devon.

The rare zig-zag chimney is mainly to be found within the ‘greater Home Counties.’ Is there a practical reason for this odd configuration?

In isolated pockets of the mill and coal towns in the North England and South Wales there is the strange phenomenon of the terraced house roof whose ridge and eaves lines slope with the gradient of the hill – the gravity defying ‘runaway roof.’ This vernacular style tricks the eye, making the building look decidedly wonky.

Alongside the mystery is the history, which is equally compelling. The history and of out-of-true tales told by the spirit of the buildings which have observed all within and without over their lifetime, through their ‘wind-eyes.’

Without exception, the local populations have learned to love the curios in their midst. 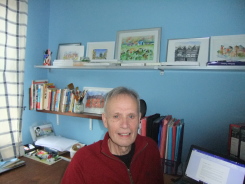 As a Chartered Civil and Structural Engineer, Steven Roughton has over 30 years’ experience designing and investigating structures, defying gravity. After graduation he trained with Ove Arup, later running his own small consultancy for over 20 years. During his career he cultivated an interest in the forensic examination of buildings, delving into their history and mystery and applying his technical knowledge to fully appraise and understand the structures, their character.
More about Steven Roughton