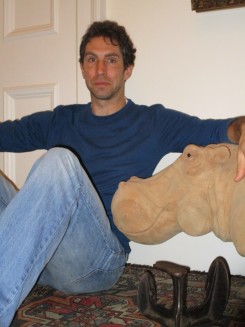 Dr Andy Dobson is a research biologist whose papers have been cited well over 1000 times in the academic literature. After a first-class degree in Ecology from Durham, Andy completed a PhD on the ecology of hen harriers at Nottingham University, before joining the University of Oxford’s Zoology Department. At Oxford he developed an interest in epidemiology, and used mathematical modelling to predict changes in the risk of Lyme disease and other tick-borne infections. During a later fellowship at Stirling University, Andy turned his attention to host-parasite interactions, and used simulation models to track the resulting evolutionary dynamics. Most recently, he took up a research post at Edinburgh University to apply data-science techniques to anti-poaching efforts. He is currently a freelance scientific copy-editor, and remains a Visiting Academic at Edinburgh.

In his free time, Andy can be found either in a tent on the west coast of Scotland, or – more likely – in a rowing boat on the Union Canal.