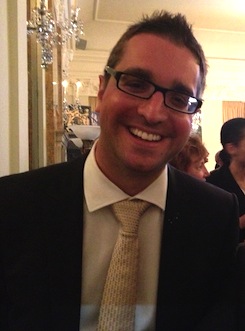 Christopher Moran is Professor of US National Security at the University of Warwick. He is the author of two single-authored books: Classified: Secrecy and the State in Modern Britain, which won the St. Ermin’s Intelligence Book of the Year Award in 2013, and Company Confessions: Secrets, Memoirs and the CIA. His work has appeared in leading academic journals including Foreign Affairs, International Affairs, and The English Historical Review. He is a former British Academy Postdoctoral Fellow and since 2016 has been a Fellow of the Royal Historical Society.

Christopher was born in 1982 and raised by the sea in Weymouth, Dorset. He presently lives in North Oxfordshire with his wife, a renowned scholar of espionage in Renaissance Venice, and their two-year-old daughter. He is a regular visitor to the United States for research purposes and, for over ten years, has served as a historical consultant to the International Spy Museum in Washington, D.C.

Entitled ‘The Sinews of Security’, he is currently writing a 180,00 word history of the turbulent relationship between Richard Nixon, Henry Kissinger, and the CIA. Drawing on over a decade’s research, the book assesses the CIA’s role in helping ‘Nixinger’ to engineer American withdrawal from Vietnam, rapprochement with China, détente with the Soviet Union, and controversial regime change in Latin America. It also features exciting new revelations about Watergate, including original material about the infamous 18.5 minute gap in Nixon’s White House tapes.

Andrew was recommended to me by my friend and long-time mentor, Richard Aldrich. Andrew appealed to me for a variety of reasons. One, he is an intelligence historian himself, and has successfully escorted many spy books into print, including a number of bestsellers. Two, he has a world-wide reputation for quality, meaning that there is a certain prestige that comes with being one of his authors. Finally, and most importantly, he is passionate about his job and his community of clients.