Wings of Ice: The Air Race to the Poles
Jeff Maynard 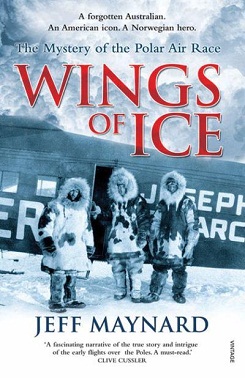 Was American Richard Byrd really the first to fly to the North Pole? And why did enigmatic Australian explorer Sir Hubert Wilkins disappear from the
history books? At the end of World War One large areas at the top and bottom of the globe were still vast cold mysteries. Into these blanks on the map explorers would, for the first time, fly. They were urged on by their sponsors to achieve 'firsts', by their governments to claim new land, and by a public fascinated with moving pictures and radio broadcasts.

In March 1926 Wilkins and Byrd, along with veteran explorer Roald Amundsen, were locked in a race to fly to the North Pole. A year later, while Amundsen was involved in the bitter dispute that would cost him his life, Byrd announced he would fly to the South Pole. Wilkins was hired to beat him.
Late in 1928 Byrd and Wilkins unloaded their planes on opposite sides of Antarctica and prepared for the last great race in polar history. It was a race that would ensure Byrd's place as an American icon and during his life no one dared question his claims. It was only after his death that he was accused of being 'the greatest fraud in polar history'. Wilkins died in 1958 and disappeared from the history books after his jealous vindictive wife locked away his records and diaries.

Factually based and methodically researched, Wings of Ice reveals what really happened on Byrd's polar flights and traces the lost records of Sir Hubert Wilkins. It lays out clues then challenges the reader to solve an eighty-year-old mystery. All while bringing to light an untold story of courage, daring and adventure.

Jeff Maynard is an Australian author and documentary maker. His books include Niagara's Gold, Divers in Time and The Letterbox War of Kamarooka Street. Jeff has written widely for television and contributed articles to magazines around the world. He is a former editor of Australian Motorcycle News and retains an interest in classic motorcycles. He is a keen scuba diver and a former field-editor for Australasian Scuba Diver. He is President of the Historical Diving Society: South East Asia, Pacific and a Member of the Explorers Club.
More about Jeff Maynard