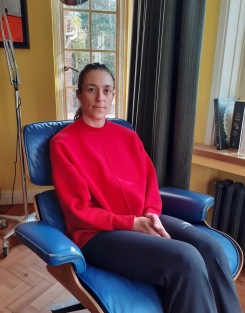 Julia Engelhorn is a 40-year-old artist and the mother of four children, two of whom are still alive. Julia comes from an unusually privileged background as the sale of her grandfather Curt Engelhorn’s pharmaceutical business in 1997 made the family very wealthy. Born to a German father and Spanish mother, Julia and her three sisters were raised first in Switzerland and then in the UK. She studied Hospitality and Tourism at Strathclyde University before moving to Barcelona to further her education. It was there, at the age of 22, she met her future husband, Mario Deus, a maxillofacial dental surgeon. They married in 2007 and had their first child, César, two years later. In 2012 they relocated to Cape Town, South Africa near to Julia’s sister Vicky’s family. Not long after the move Julia fell pregnant again and twins Maximo and Octavia were born in August 2013. However, by now the marriage was in trouble. Instead of moving to South Africa with his family, Mario spent the majority of his time in Spain, visiting his wife and children just for holidays. Julia’s life became that of a single parent and by May 2014 she realised that she no longer wanted to be with Mario. The subsequent divorce was acrimonious and fraught with difficulties. Mario resented Julia’s decision to split and lashed out in cruel and unexpected ways. However, by November 2015 the divorce was finalised and Julia hoped that a defined set of rules would allow them to move forward constructively, paving the way for a lifetime of joint parenting. She could not have been more wrong and in April 2016 Mario took his revenge in the worst way imaginable. Julia’s search for meaning in this tragedy is contained in the pages of her memoir and she has since rebuilt her life with César, partner Iiro Seppänen and their daughter Freya. Today, the family live in the UK and Julia works with broken, abandoned and found materials to create beautiful and unusual works of art.