Animals Passions: : Everything You Wanted To Know About The Sex Life of Animals
Kieron Connolly

All birds mate for life, right? Wrong. Males of any species never carry eggs during pregnancy, right? Wrong. Transvestitism, surely, is the domain of humans only. Wrong.

From peacocks to the praying mantis, we may think we know all about animal sex, but did you know about the female spotted hyena’s pseudophallus? Or, that if it were scientifically accurate, Finding Nemo would have been more Greek tragedy than Disney with Nemo’s father turning into his mother after she died, and then Nemo mating with her? Or that female whiptail lizards can clone themselves? Or that a mature female aphid already has her granddaughter growing inside her?

Drawing on the latest published research, Animal Passions is a lively, fascinating and accessible exploration of how birds, the bees, even the educated fleas really do do it. From lactating male fruit bats to the ejaculations of male honeybees that are so explosive they die, from sand sharks that eat weaker siblings in the uterus to grey whales that mate belly to belly, the book ranges from harems to sexual violence to courtship displays and songs, from male cichlid fish building sand castles to impress a mate to courting grebes that walk side by side to see if they move in step.

Arranged in chapters such as ‘Eating the Baby’, ‘Sex Changes’, ‘Asexual Reproduction’ and ‘Tranvestites’, the book covers such topics as incest and infanticide, menstruation and menopause; homosexuality and hermaphrodites, pair-bonding, monogamy and promiscuity.

Lightly, at times humorously, written for the general reader, the book ranges across all classes of animals and features examples from more than 500 species. It’s so interesting that, for better or worse, you may well find yourself asking the next person you see: ‘Do you want to know how slugs do it?’ 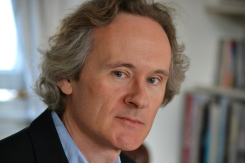 Kieron Connolly is the author of Dark History of Hollywood: A Century of Greed, Corruption and Scandal behind the Movies and Bloody History of America: Revolution, Race and War. He has also written three books featuring photographs of abandoned worlds: Abandoned Places, Abandoned Civilisations and Abandoned Castles. For children, his books include Stories of the Constellations: Myths & Legends of the Night Skies, Disasters, Dragons and World’s Worst Monsters & Villains. He has worked both in publishing and journalism, writing for The Times, the Daily Mail and the Mail on Sund...
More about Kieron Connolly