In the polygamous community of Redemption in southern British Columbia, the abuse of women and neglect of children is legitimized and hidden under the cloak of religion. Unhappy, overworked mothers take their frustration out on Daisy who is a scapegoat and receives little respect. She finds escape by listening to FM radio and the forbidden rock and roll of the early 1960s. While part of her yearns to see the outside world, leaving is impossible. Her mother tells her that they remain trapped because of something her grandfather did years earlier.

It is the eve of the Placement, when all the fifteen-year-old girls are to become celestial wives by marrying a deserving member of the priesthood, a much older man with multiple wives. Excitement and speculation run high, but Daisy dreams of marriage to Tobias, a handsome young man from their sister community in Utah. Her best friend, Brighten, desperately hopes to be named the new celestial sister, a role that would save her from a forced marriage. Both girls’ dreams are shattered, and they try to run away together, but only Daisy makes it to the “outside.”

Daisy falls in with a band of flower children on their way to pick fruit in the orchards of the Okanagan Valley. She befriends Saffron and meets Jean, a moody Frenchman who has bought a ranch and is determined to show the world that the area is suitable for grape-growing and wine-making. He and his father have quarreled over his plans, leaving Jean angry but determined.

Four years later, Daisy has managed to establish something of a new life for herself, but she is struggling to find a way to help her mother, Brighten and others escape Redemption. She questions why the right to freedom of religion is used as an excuse for inaction by police and government.

Tobias finds her and tries to persuade her to return to Redemption. Daisy resists, but she struggles in her new life, plagued by her lack of education and mistrust of “outsiders.” She and Jean begin a romance, but when he tries to get physical, she rejects him, telling him that she can’t fit into his world because of her upbringing.

In one of Daisy and Brighten’s secretive conversations over a radio frequency, Brighten confides that she is pregnant and begs Daisy to help her escape before the baby is born. Daisy decides she must take risks and seeks help from a lawyer. She also works with a journalist who has offered to write articles about the abuse in Redemption in return for information about Daisy’s grandfather, a fraudster who bilked the Utah church out of millions of dollars.

With nothing working out, Daisy decides to return to Redemption to help Brighten escape and to try persuading the women to speak up about the abuse. She finds Redemption full of pitfalls and danger. When Daisy’s grandfather dies, she and her mother try to flee but are caught. The High Bishop of Utah orders a blood atonement, the murder of Daisy and her mother. Tobias is assigned to commit the murders but is unable to carry them out because of his love for Daisy.

Through Daisy’s efforts, the government and police finally take action against the polygamists and help women leave the community. Daisy uses money that her grandfather left her to start a non-profit society dedicated to helping these women and their children start new lives. She and Jean work out their problems and marry. 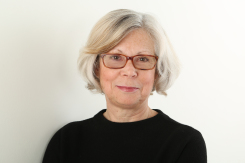 Dubbed “the family story teller” from an early age, Leslie often made up tales in the back seat of the family car as she traveled the British Columbia backwoods campaign trail with her politician-father. During those “crazy car rides with Dad” she grew to love the people, the stunning landscape and the history of this unique part of the world, and she yearned to write about them. But recognizing that a career in writing would not pay the bills she chose finance instead. She earned a degree in Economics and Political Science from Carleton University in Ottawa, Ontario...
More about Leslie Howard