Castle of the Eagles: Escape from Mussolini's Colditz
Mark Felton 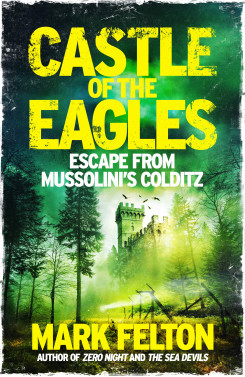 Vincigliata Castle, a menacing medieval fortress set in the beautiful Tuscan hills above Florence, has been turned into a very special prisoner of war camp on Italian dictator Benito Mussolini’s personal order. Perched high on a hill, the forbidding building holds 13 of the most senior British and Commonwealth officers captured during the campaigns in North Africa and Crete. The 13 consist of an air marshal, twelve generals and brigadiers along with 11 aides and batmen. They are guarded by almost 200 Italian soldiers under the command of a hardened fascist answerable directly to Mussolini. It is imperative that some of these famous generals manage to get back into the war as soon as possible. The prisoners include the British commander in Egypt, the deputy commander of the RAF in the Middle East, the commander in Libya, and the general commanding the 2nd Armoured Division.

Campo 12, as the Italians call Vincigliata Castle, is considered escape proof, an Italian Colditz. But the Italians have not counted on the bravery, ingenuity and barefaced pluck of their illustrious prisoners. After several false starts, an extraordinary assemblage of middle-aged POWs hatches a complex escape plan. Short of food and facing almost insuperable challenges in finding escape materials, the prisoners, regardless of rank or age, all work together to drive a complex tunnel beneath the castle through its foundations and solid bedrock. It is a task that takes them six arduous and dangerous months to complete.

By March 1943 the tunnel is ready. The potential escapers have also spent months making civilian clothes, forging identity papers, gathering rations and even constructing elaborate human dummies to place in their beds to fool the guards during their nighttime inspections after they have escaped.  It is decided that six men will attempt the impossible, forming three 2-man teams. One escaper is an air marshal, three are brigadiers, and two are lieutenant-generals, probably the unlikeliest collection of would-be prison breakers in history. Three of them are knights of the realm and two have won the Victoria Cross, Britain’s highest award for gallantry. One is handicapped by a missing hand and eye, another by a gammy hip. The youngest is 48, the oldest 63.

During a dark and rain swept night, the three teams burst out of the earth below the castle and slip away, all intent on reaching neutral Switzerland. What follows are extraordinary adventures as the escapers go on the run inside Italy. Will any of them make to freedom?

Castle of the Eagles, written from official documents and personal memoirs, tells the thrilling full story of the extraordinary escape of the generals from Mussolini’s Colditz for the first time, a forgotten but almost unbelievable tale of courage and daring by the unlikeliest group of escapers in World War II.