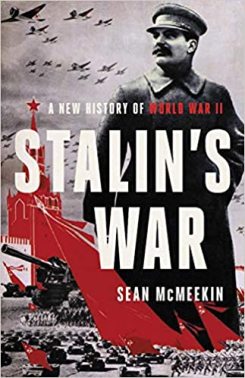 In the popular mind, World War II endures to this day as the “Good War,” a heroic struggle against evil with a happy ending.  But there have always been nagging questions, not least whether any conceivable postwar world was worth the sacrifice of some 55 million dead.  Why did a war begun on behalf of Poland in 1939 end with her brutal dismemberment?  If freedom truly triumphed over totalitarianism, why did eastern Europe and the Balkans succumb to Communist dictatorship, followed in short order by China, North Korea, and Vietnam?  Why were the earliest freedom fighters against foreign aggression – Chiang Kai-Shek’s nationalists, the Poles, Mihailovic’s Chetniks in Yugoslavia – abandoned by the victorious Allies, while clients of Stalin, Hitler’s key strategic ally from 1939-41, won all?  Why did the “Good War” consign nearly half the human race, from Berlin to Beijing, to the agonies of Communism?

The morally perverse outcome of World War II was no accident.  In his new book, Sean McMeekin draws on new research in Russian, British, German, Turkish, and U.S. archives to fundamentally reinterpret the conflict, from beginning to end.  Hitler’s genocidal ambition may have helped unleash armageddon, but as McMeekin shows in Stalin’s War, the war which emerged from the Molotov-Ribbentrop Pact of August 1939 was the one Stalin wanted, not Hitler.  So, too, was the Pacific war of 1941-1945 the direct result of Stalin’s non-aggression Pact with Tokyo of April 1941, which had the goal of unleashing the furies of war between Japan and the “Anglo-Saxon powers.”

By June 1941, the “imperialist war” between the hostile factions of the capitalist world, as it was styled in Communist propaganda, was going Stalin’s way.  France and the Netherlands, two leading European imperial powers, had been routed.  The British empire had been humiliated and almost fatally weakened, as shown in German victories that spring in Greece, Libya, Crete, and Iraq.  The Soviet arms buildup underway since the launch of the first Five Year Plan in 1928 was nearly complete.  Following Lenin’s program to a tee, Stalin had “exploit[ed] the contradictions and opposition between two imperialist power groups, between two capitalist groups of states, and incite[d] them to attack each other.” “As soon as we are strong enough to overthrow the entire capitalist world,” Lenin had vowed, “we will seize it at once by the throat.”

The one thing Stalin had not reckoned on was that, far from bleeding the strength of each warring coalition equally as had the First World War, the Second had been so lopsided that Germany had hardly been weakened at all.  By striking in June 1941, before Russia was ready, Hitler turned the tables on Stalin and very nearly won the war.  By October, the Germans, after destroying five Soviet armies, taking four million prisoners, and conquering vast tracts of strategic territory, crippling Russian mining, agriculture, and war industry, were at the gates of Moscow, and the Soviet government was evacuated.  On the cusp of triumph just four months ago, Communism seemed finished.

But Stalin had one last card to play.  Just as his empire was crumbling, Soviet sympathizers and “agents of influence” in the West opened up a critical Lend-Lease lifeline to Russia.  In a story so bizarre that not even Lenin could have imagined it, Communism would be rescued from the brink of defeat by Stalin’s sworn and oft-declared arch-enemy, Anglo-Saxon capitalism.