I’ve been sitting at a desk writing history books for something over ten years . It’s been engrossing, demanding and occasionally exhausting. This is a good moment to take stock. What does it add up to? Four books in various languages (the last still in proof), thousands of pages of handwritten notes: 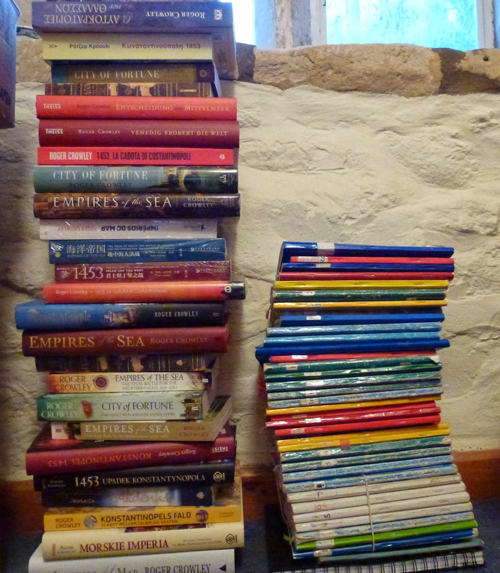 Despite the impressive number of different language versions it’s been a modest living not a handsome one – I’m still waiting for the film rights. People come by and take out options but I’ve become realistic. I spent three unpaid months writing outlines for a Game of Thrones  style history epic based on one of my books at a publisher’s behest – no luck so far. There’s an element of gambling in all this – the next book could make it, a producer could get serious, but I’ve learned that seasoned punters read the odds – a history of Venice is never going to be Fifty Shades of Grey.

Writing about the history of the Mediterranean has its pluses and minuses. It’s not an area of heavy publishing traffic such as the Second Word War or the Tudors, but it does translate: there’s a slow burn of foreign rights. I’ve written for personal interest but with an eye to the market: I’ve benefited from a post- 9/11 interest in Islam/Christianity issues. I’ve missed tricks, sometimes using up my material too fast, got titles wrong. I’ve created what post hoc looks like a trilogy of books about Mediterranean history but if I’d been more strategic I’d have done it differently. You live and hope to learn.  I now think that skirting round heavily covered topics can be a mistake. There’s a reason for the squillions of books on Henry VIII and Hitler. People read them. I do study carefully (and sometimes enviously) what sells. It’s also apparent that you’re only as good as your last book: point of sale information, available to all publishers, mercilessly reveals your sales graph. On it can hang the size of your next advance.  You always have to be on the top of your game.

I’ve learned that writing the books is not enough. Staggering from the desk, you then have to promote both the book and yourself: as in life generally, we are continuously reminded that we’re all our own brands. A good website is invaluable. Mine has brought me quite a number of interesting opportunities, but I don’t write enough articles or feed the Twitter beast (slowly working on that). I do literature festivals – stimulating to do and they put your name about – but their pure sales value seems dubious. Ideally all authors need to construct their own marketing plans – publishers only do so much – and we’re all invited to talk directly to our readers these days. Over time you get slightly better at judging opportunity costs after being ignored at bookshop signings or trying to animate tiny audiences.

But it’s not all orthopaedic risk at the desk or promotional boasting. We historians are lucky. They let us out to do research. We get to ramble around libraries and museums and go on trips. In my case, because the Mediterranean world is my main subject, I’ve been to fossick around Istanbul, Venice, Crete, Cyprus, Lisbon and various other places. And from time to time unexpected offers and opportunities pop into the inbox. I’ve been to study days with the US Navy in Washington and to NATO HQ in Belgium. I get to talk to varied audiences ranging from the Old Folks home down the road, to the Hay Festival to the US Army in Stuttgart and BBC radio. I’ve been to bob up and down in a boat at the site of the battle of Lepanto and to the Topkapi Palace outside opening hours for TV documentaries.  I’ve given one day personalised tours of Istanbul and been on quite a few ships. I do one cruise a year with Zegrahm Expeditions, a small US company, and I’ve spent nine days with my wife on a luxury vessel consisting entirely of privately owned apartments. 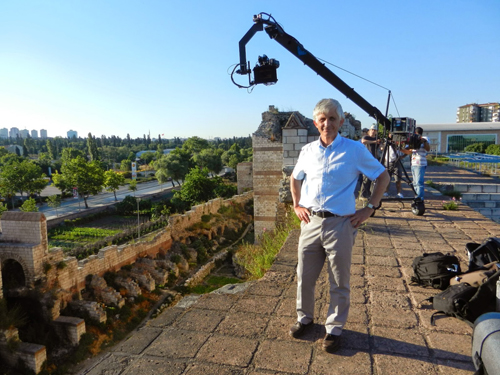 It’s the unexpected variety that makes these sidelines so engaging. A few weeks ago I was invited to talk to the cast of the Royal Shakespeare Company about the siege of Malta as background for their forthcoming production of Marlowe’s The Jew of Malta, for which I’ve also written programme notes. In a couple of weeks we’re going to see the results at the opening night in Stratford. Then it’s back to the desk, I guess, and what to write next. The house and garden could also do with attention.

My latest book, Conquerors: How Portugal seized the Indian Ocean and forged the First Global Empire will be out in the UK on 17 September, in the US on 1 December.

Roger Crowley was born in 1951 and educated at Cambridge University. As the child of a naval family, early experiences of life in Malta gave him a deep interest in the history and culture of the Mediterranean world. After finishing school he spent his summers pottering in Greece; after university...More about Roger Crowley