Too Hurt to Stay: The True Story of a Troubled Boy's Desperate Search for a Loving Home
Casey Watson 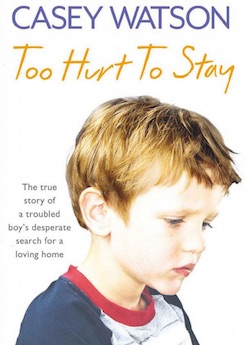 ‘An angry, streetwise eight year old with an attitude that’s twice as big as himself’  is how social services describe Spencer when they ask Casey and Mike to take him on as an emergency placement. He’s not come to them via any the usual routes, either. He’s apparently just turned up in the social service offices and demanded to be taken into care.  It’s a desperate act, a cry for help, but his parents’ reaction speaks volumes:  they tell social services they’re basically washing their hands of him, saying there’s nothing more they can do.

Naturally, Casey and Mike  agree  to take the troubled boy. After all, Casey reasons, how difficult can an eight year old be? But the Watson family are soon to discover the answer to that question – and find out that that this angelic-looking little boy isn’t all that he seems.

Spencer’s the middle child of five siblings, the rest of whom, the parents say,  ‘are normal’.  It’s just Spencer who’s ‘vicious’ and ‘ born evil’ they claim. Casey’s disgusted – kids aren’t ‘born evil’, they get damaged. And she’s determined to get to the bottom of why Spencer is like he is.  But it’s hard. Spencer’s constant stealing and aggression and repeated absconding doesn’t just challenge the  Watson family; it creates bad feeling and antagonism all around the neighbourhood. And when vigilante neighbours sign a petition demanding that the Watsons are evicted,  Casey and Mike’s faith in their skills is pushed to the limits -  can they really turn this ‘eight year old walking crime spree’  around?

But then one day, Spencer’s mum turns up alone at social services, and everything they thought  they knew about this desperate little boy is turned upside down...