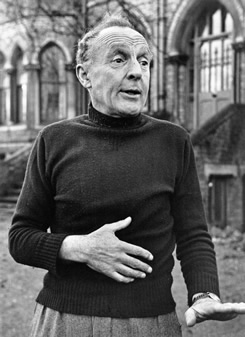 Joyce Cary was born in 1888 into an old Anglo-Irish family and educated at Clifton. He studied art, first in Edinburgh and then in Paris , before going up to Trinity College, Oxford, in 1909 to read law. On coming down he served as a Red Cross orderly in the Balkan War of 1912-13,the inspiration for Memoir of the Bobotes , before joining the Nigerian Political Service.

He served in the Nigeria Regiment during the First World War, was wounded while fighting in the Cameroons, and returned to civil duty in Nigeria in 1917 as a district officer. His time in Africa provided the inspiration for his first four novels. Though he settled in Oxford as a fulltime writer in 1920, it was not until 1932 that his first book was published. At the time of his death in 1957, he was recognised as one of the leading novelists in the world.

Cary is probably best known as a novelist and especially for Mister Johnson and ‘The First Tryptych’ (Herself Surprised, To Be A Pilgrim and The Horse’s Mouth) in which the three main protagonists narrate their interlocking experiences and reveal their contrasting personalities. However he was also a fine short story writer, essayist and poet.

“Whenever I am idle I choose a Cary novel in the way I might seek a friend’s company, and it is not long before I am encouraged, inspired to write.” Paul Theroux

“I certainly feel that Cary’s books should be brought out in a collected edition…They are memorable and should be remembered.” Graham Greene

“Authors who can tell fairy stories, who can reflect life as in a looking glass are plentiful. Those who can create are rare.” John Betjeman

“One of the best of our novelists, certainly one of the most original, in the great early tradition of Defoe and Fielding.” Elizabeth Bowen

“To find a novelist who saw more deeply and conveyed more truly you have to go back to Dostoievsky and Tolstoy, Balzac and Goethe, Mann and Hesse….What makes him a life enhancer is the overwhelming sense the reader gets from him that the universe, for all its horrors and inexplicabilities, makes sense – obvious and glorious sense.” Bernard Levin