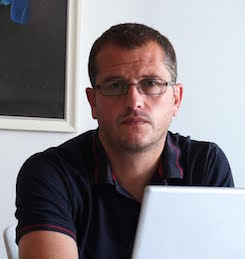 Adrian Addison is a freelance journalist now based in Spain, mostly covering FC Barcelona. He was previously an investigative reporter on the BBC Six O'clock News and the award-winning news editor on the Today programme, BBC Radio Four. He was a tabloid reporter himself for many years before joining the BBC, working as a staff reporter on The Sun and as a feature writer on the now defunct News of the World. He started out on local papers in his native north east. Addison left a hugely populated state school with two GCSE's and joined a Youth Training Scheme that led nowhere, he didn't go to university.

I wrote a novel a few years ago that seemed to be going to be picked up but then fell, horribly, to its death (as most first novels do). Oh well. I'd come across Andrew during that struggle to find an agent and had signed up for his newsletter. It arrived in my inbox one day when I was sitting in a public library in Spain because the Internet didn't work in my house. The Mail idea was in my head, so I sent him about two paragraphs. Simple as that. He replied in nanoseconds. It was a damn tricky book to sell, a subject that obviously made many nervous, but Andrew persevered and nailed a deal with Oneworld. His instinct was faultless. It would not be here were it not for him