Body for Rent: The horrifying true story of life behind the curtains of the Red Light District.
Tim Tate, Anna Hendriks 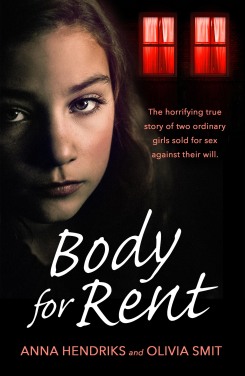 No child grows up hoping to become a prostitute. No little girl dreams of one day renting her body to dozens of men, day in day out, allowing them to penetrate her, careless of the damage they cause.  And yet for thousands – tens of thousands - of women this is what happens.

Anna Hendriks and Olivia Smit were two of them; vulnerable young girls when they were groomed and forced at gunpoint into prostitution in the commercialised sex industry. They ended up behind the neon-lit glass windows of Amsterdam’s Red Light District, each servicing an average of eight clients every day. They worked eight-hour shifts, six days a week, renting their bodies to literally thousands of men (and sometimes women).

They experienced the worst degradation human beings can inflict on one another, required to accommodate every extreme fetish harboured by the men who knocked on their windows. They contracted sexually transmitted infections, endured abortions and became reliant on alcohol to ease the pain of their existence.

The Red Light District is one of the world’s favourite tourist attractions and – in theory – a place where women willingly – and safely - rent their bodies for sex, protected from traffickers and violent pimps.  The reality – as Anna and Olivia discovered – is that corruption, organised crime, violence and drug dealing which underpins the neon-lit streets.  They witnessed the plight other young girls and women, many of them trafficked into this so-called legal industry by violent gangs and kept compliant with threats or drugs while the police turned a blind eye.

And when – finally – they found the strength to try and free themselves they discovered the hardest truth of all: if falling – or being forced -  into the sex trade is shockingly easy, escaping from prostitution is almost impossible. It took all the strength and resolve they possessed – and the enduring bonds of their childhood friendship – to pull themselves out of the world in which they had existed for so long.  Finally in 2014, they were present in court when the man who had groomed them into prostitution, and who forced them to work behind the Red Light District windows, was prosecuted, convicted and sent to prison for six years.

Tim is a multi-award winning documentary film-maker, investigative journalist and best-selling author. Over a 30-year career he produced and directed almost 90 films for all British terrestrial channels as well as Discovery, A&E & Court Television networks in the United States.   His films have been honoured by Amnesty International, the Royal Television Society, UNESCO, the International Documentary Association, the Association for International Broadcasting, the [US] National Academy of Cable Broadcasting and the New York Festivals.   Tim’s 1992 documentary ...
More about Tim Tate,

Anna Hendriks and Olivia Smit are the pseudonyms of two middle-class Dutch women who worked for seven and five years respectively as prostitutes the windows of Amsterdam’s Red Light District.  Their story is a shocking account of the legal trade in women’s bodies, a warning of how easy it is for young girls to be groomed and trafficked into the commercial sex industry – and a cautionary tale of how difficult it is to escape.  Anna and Olivia have chosen to use pseudonyms because prostitution – whether voluntary or enforced – carries an enduring stigm...
More about Anna Hendriks