The Devil on my Doorstep
Katy Weitz, Annabelle Forest 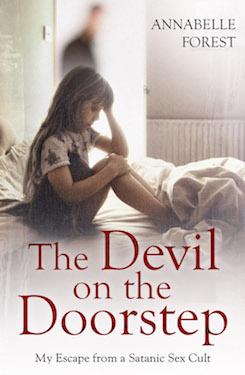 Annabelle Forest was just seven years old when she was inducted into a satanic sex cult by her own mother.

For the next few years Annabelle was brainwashed by the cult’s evil leader Colin Batley, who ran a harem of followers from his unassuming cul-de-sac in Kidwelly, Wales.

Colin ruled the cult with an iron will and his twisted religious ideology became the backdrop to Annabelle’s childhood.

Then one sunny summer’s day, aged just 11, Annabelle was forced to become one of Batley’s sex slaves when he raped her in her own home.

He told her if she didn’t comply she would go to hell.

And so began Annabelle’s torment as she was repeatedly raped by Batley.

At 14 her own mother started joining in the abuse sessions and even filmed Annabelle having sex with a boy.

Annabelle lived a double life - a schoolgirl by day, a sex slave at night.

It was hell on earth, and it might have endured for years had Annabelle not fallen pregnant at 17 her daughter Emily, Batley’s baby.

Emily gave Annabelle a reason to live and in the middle of the night, May 2009, Annabelle and Emily made their escape.

In 2011 her evidence helped convict 48-year-old Batley and her mother for a string of sex crimes.

Two others were convicted in this groundbreaking case that shocked the world and came to be known as the ‘cul-de-sac cult’.

But Annabelle’s story was far from over – now she had to adjust to a new life of freedom and learn to cope without her mother.

Today she lives a happy and settled life with Emily and her partner but the nightmares of her damaged past will haunt her forever.

Annabelle Forest is a pseudonym since she was awarded lifelong anonymity by the courts as a victim of a satanic sex cult led by Colin Batley. In 2011 she helped convict Batley and her own mother for a string of sex crimes against her and others.    Now 24, Annabelle is happily settled with her long-term partner, daughter Emily, five, and is expecting her second child. Since gaining her freedom, Annabelle has learned to adjust to life outside the bizarre religious cult that held her in its grasp for a decade. In her memoir  The Devil on my Doorstep she hopes to inspire oth...
More about Annabelle Forest