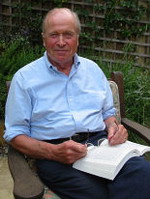 After taking a double First in History and a Russian language qualification at Cambridge University, Bryan Cartledge undertook research into aspects of the Russian Revolution at St. Antony’s College, Oxford (where he was elected to a Research Fellowship in 1958) and at the Hoover Institute, Stanford University.

He was enlisted to assist Sir Anthony Eden (later the Earl of Avon) with the first volume of his memoirs, an experience which encouraged him to embark on a diplomatic career.

In the British Diplomatic Service, Cartledge served in Sweden, the Soviet Union and Iran before being appointed, in 1977, to be Private Secretary (Overseas Affairs) to the British Prime Minister; he served both James Callaghan and Margaret Thatcher in that capacity before taking up his first ambassadorial appointment as British Ambassador to Hungary, in 1980.

He then headed the Defence and Overseas Secretariat of the Cabinet Office, as Deputy Secretary of the British Cabinet, before returning to Moscow as Ambassador, where he had regular dealings with Mikhail Gorbachev and Edvard Shevernadze. Cartledge left the Diplomatic Service in 1988 on his election to be Principal of Linacre College, Oxford.

In Oxford, he has edited six books on environmental issues. He holds diplomas in the Hungarian language from the Universities of Westminster and Debrecen (Hungary).

His history of Hungary, The Will to Survive, fulfils an aspiration which grew out of his deep interest in that country, where he lived for three years in the early 1980s.