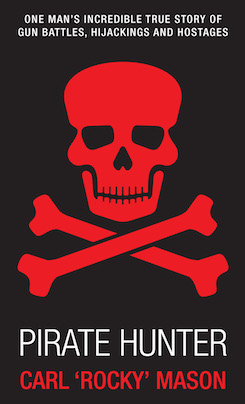 A New War. A New Enemy. A New Battleground. One Man’s Impossible Mission.

“I’m standing on the bridge of a huge container ship staring into the eyes of the pirate leader. There are ten others with him, one of whom has a knife to my throat. They’ve already killed the first officer and thrown his body overboard. I’m dressed in a suit and tie. They think I’m here to negotiate a ransom. But I’m not. I‘m here to retake the ship. I’ve got one ex-marine beside me and another four trying to board in secret. As per the requirements of law, we’re unarmed.”

Former Royal Marine Commando Rocky Mason has had more than his fair share of pirate encounters. Ever since he was asked to retake a hijacked ship in 2005, he has travelled the world’s most dangerous waterways (South China Sea, Gulf of Aden and Straits of Benin), protecting ships from pirate attacks.

Most of his time has been spent near the 2,000-mile coastline of Somalia, aka Pirate Alley, the most dangerous strip of ocean in the world. Each year 23,000 ships carrying over 50% of the world’s cargo sail these waters via the Suez Canal.

Pirate Hunter details Rocky’s non-stop adventures and encounters with pirates. He has lost and retaken ships, been shot at with AK47s and rocket launchers - and in one instance jumped into the ocean to escape certain death. Bullets zipped through the water so close he could feel their wake. Rocky’s job is often made impossible because the law does not permit him to carry weapons on a commercial ship, so he has to find non-lethal ways to battle the pirates.

This is the first book of its kind, a unique and rip-roaring account of what it’s like to be on the front line of this new war. Pirate Hunter also charts the causes and rise of piracy (by 50% each year since 2006, increasing insurance premiums tenfold, forcing up prices of our everyday goods) and, for the first time, blows the lid on the sophisticated piracy network, which involves informers and moneymen based in London and schools of piracy run by ex-Special-Forces in the extraordinary pirate city of Eyl, where, at the time of writing, 28 vessels and 587 hostages are currently held.*

Apart from the financial and human cost of piracy, there are other tremendous dangers greater than anyone has yet realised: “If pirates attack a vessel carrying Liquid Petroleum Gas,” Rocky says, “and a tank is ruptured by a bullet or RPG, the blast will be equivalent to the power of thirty Hiroshima bombs - the biggest non-nuclear explosion this planet will ever have ever seen.”

Rocky has over 500 royalty free photos of pirate attacks involving himself for inclusion in the book and which can be used for publicity purposes. 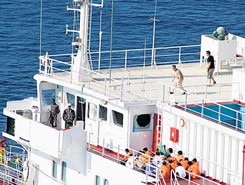 Carl ‘Rocky’ Mason (45) left school at sixteen and, after completing his training aged just seventeen, he served with the commando units of Royal Marines - the most respected fighting force in the world – for the next ten years. After receiving an exemplary discharge, Rocky acted as military advisor to Mearsk Shipping during the First Gulf War and served on many ships in the war zone.At the end of the conflict he took part in a variety of privately run missions in Africa and the Far East and worked as a close protection, surveillance and undercover operative in the UK.Aft...
More about Carl 'Rocky' Mason