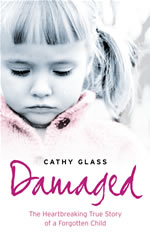 Damaged is the true story of the inspiring relationship forged between Cathy, an experienced foster carer and Jodie, her most challenging placement. The book is a memoir, written and narrated by Cathy. The story opens at the local Social Services office, where Cathy is emotionally blackmailed: if she doesn't agree to take Jodie today, she will have to go into a residential care home, which is clearly unsuitable for an eight year old girl. Cathy is wary; Jodie's violence and aggressive behaviour have seen off five carers in four months, and before going into care, she set a family pet on fire. Despite her fears, Cathy decides to accept Jodie.

Jodie arrives, and her first act is to soil herself, and then wipe it on her face, grinning wickedly. Jodie meets Cathy's teenage children: Adrian, Paula and Lucy, and greets each of them with a sharp kick to the shins. Later, Cathy asks them for their first impressions. Adrian says she reminds him of Chucky, the doll from the horror film Child's Play. That night, Cathy wakes to find Jodie covered in blood, having cut her own wrist, and smeared the blood over her face.

Jodie's behaviour improves, as she begins to trust Cathy and the children. She begins to 'disclose', revealing for the first time that she was sexually abused by her father. Over time, with childish honesty, she reveals details of her abuse at the hands of her parents and other relatives. It becomes clear that Jodie's parents were involved in a sickening paedophile ring, with neighbours and social services turning a blind eye. Cathy prepares for Christmas, and tries to help Jodie cope with her increasing nightmares and hallucinations. Jodie has to undergo a number of interviews and physical examinations, to build a case to prosecute her parents. Meanwhile, Cathy tries to find a school which will accept someone with Jodie's challenging needs. Christmas and the New Year pass, and Cathy is delighted when Jodie makes friends in her first days at school. However, as Jodie continues to disclose details of her abuse, she becomes withdrawn, with frequent panic attacks.

To cope with the shock, she begins using a number of alternate identities, but seems to be unaware of them when questioned later. Jodie is diagnosed as suffering from Dissociative Identity Disorder. Meanwhile, the police prosecution collapses, when Jodie's former neighbours refuse to testify. Jodie becomes increasingly withdrawn, and is pulled out of school. It's clear she needs psychiatric therapy. Cathy urges Social Services to provide funding for therapy, and eventually a meeting is arranged. Cathy arrives in hope, but is shocked when the panel decide to take Jodie away from her, and place her in a residential therapy unit.

Cathy and her children prepare Jodie for the move, and worry that she will see it as yet another rejection. After Jodie leaves, Cathy finds a touching letter from Jodie, asking if Cathy will be her "mummy" when she gets better. Jodie's former neighbours agree to testify after they learn their own daughter was abused, and the paedophile ring are charged and imprisoned.