Atoms Under the Floorboards: The Secret Science Hidden in Your Home
Chris Woodford 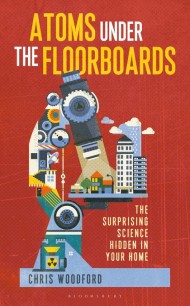 Why is falling off a ladder as dangerous as being bitten by a shark? Is it better to build skyscrapers like wobbly jellies or stacks of biscuits? How many atoms would you have to split to power a lightbulb?

From Wi-Fi Internet to heat-reflecting windows, science and technology powers our lives. But it still baffles many of us even when we've spent years studying it in school. Recent opinion surveys show that 80-90 percent of us are "interested" or "very interested" in science and acknowledge how important it is. Yet 30-60% of us think it's too specialized or too hard to understand and two thirds of 14 year-olds find it uninspiring. We confuse the "ozone layer" and "climate change", we think nuclear power is more risky than crossing the road and, despite 70% of us thinking that newspapers and TV sensationalize science, 86% of us rely on precisely these unreliable media to keep us "informed".

Atoms Under the Floorboards  helps put things right by exploring the science of everyday life in an engaging new way. Taking a tour round the house, it picks out the fascinating and surprising scientific explanations behind a variety of very common (and often entertainingly mundane) household phenomena, from gurgling drains and squeaky floorboards to rubbery custard and shiny shoes. Educational and authoritative, but also engaging and fun, it sheds new light on the science secrets hidden in our homes.

Chris Woodford had his first national magazine article published at the age of 13 and has been writing about science and technology ever since. After graduating from Cambridge University with a degree in Natural Sciences, he started his career in IBM's publishing division, then trained as an advertising copywriter in London with legendary maverick John Gillard. Quickly concluding that crisp packets and junk mail could never do justice to his literary ambitions, he moved into educational publishing as an editor at Dorling Kindersley (DK) just as it was pioneering electronic books in the mid-...
More about Chris Woodford