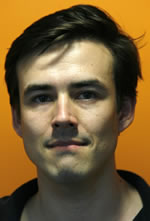 Christian Oliver was born in 1978. He grew up in Devon and studied Classics at Lincoln College, Oxford.

He then did an intensive Arabic diploma, taught English and worked as a conservationist on Crete.

After cutting his teeth as a journalist on a Devon newspaper, he joined Reuters in London in 2002. He was Iran correspondent from 2003 to 2006, a chaotic period in which he covered the Bam earthquake, two disputed elections, oil deals, civil unrest and plane crashes. The job’s main attraction lay in escaping Tehran to write features in the provinces, heading out with caviar fishermen and accompanying Zoroastrian pilgrims. From 2006 to 2007, he was senior correspondent for Venezuela and Ecuador, sacrificing interminable hours to the rambling speeches of Hugo Chavez.

He is currently on sabbatical leave from the agency, teaching English, travelling and writing.

I was attracted to Andrew Lownie’s agency by his comprehensive and useful Web site. When I saw that Andrew had written a biography of John Buchan and represented a book on Percy Sykes, there seemed no better choice for a novel on the new Great Game. I was keen to find an agent with an interest in espionage and the Middle East. I had been warned that the world of publishers and literary agents was agonisingly slow-moving, with authors waiting for up to two months for their manuscripts to be read. Andrew replied the same day to my queries and always encouraged me to forge ahead whatever doubts I might be having.