What on Earth Evolved
Christopher Lloyd 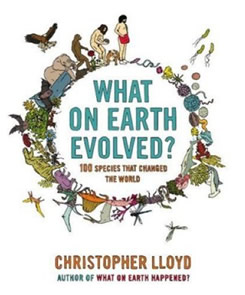 What on Earth Evolved is the first ever attempt at ranking nature’s species (both current and extinct) in order of their impact on planet, life and people. By ranking nature’s species in terms of their global impact according to five simple criteria and with biographies of c. 1,000 words detailing the achievements of each species, On the Impact of Species will be a highly informative, easy-to-digest book that will stimulate a great deal of popular interest and scientific debate.

What on Earth Evolved is unique because it:

- Considers all living things, past and present, with an equal, balanced and open perspective according to a set of simple, transparent criteria.

- Provides a context within which the impacts of Homo Sapiens can be considered alongside all other forms of life.

- Takes readers on an informative journey through life’s most exotic, bizarre and extraordinary designs, both from extinct and extant species.

- Presents material in an easy-to-read, highly accessible narrative made edgy with justifications as to why the impact of one species should outweigh another in the overall ranking.

Christopher Lloyd has had a broad and comprehensive career both as a journalist and as a general manager in the education business. After graduating with a double first class degree in history from Peterhouse, Cambridge in 1991, he helped research the personal memoirs of the ex Sunday Telegraph Editor and journalist Sir Peregrine Worsthorne. He then became a graduate trainee journalist on The Sunday Times newspaper and was trained at the City University where he gained a diploma in newspaper journalism.After two years as a news reporter, he began a new column in The Sunday Times Review sect...
More about Christopher Lloyd