What on Earth Happened?
Christopher Lloyd 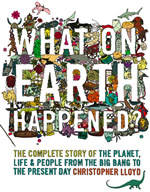 What on Earth Happened? is like no previous history of the world because:

- It is a complete account of the past. Most histories of the world are concerned only with either the history of human civilisations or the history of Earth science. Combining these two types of world history into one makes What on Earth Happened? unique.

- By interweaving the history of people with the story of the rest of life on Earth, What on Earth Happened? considers history from a holistic point of view. It does not just focus on human civilisations but has as much to do with animals, trees, plants, micro-organisms and the Earth itself. As the story of What on Earth Happened? unfolds, the reader is taken on a journey though natural evolution which leads through the birth of human civilisations up to the present day.

- It focuses on the relationship between living things and the planet. This provides an important historical context within which to understand modern issues such as global warming and climate change. By telling the story of previous human and animal lifestyles, clear suggestions emerge throughout the book as to how it may be possible to improve, or restore to balance, mankind’s current relationship with the planet and other forms of life.

- It is written in a colloquial and journalistic style designed to appeal to readers of a wide age range, not just people already interested in history or the Earth sciences. It is an easy to digest, one-stop-shop that connects the dots of the past and tells a coherent, comprehensible and true story dovetailing history with nature, science, art, religion and the environment.

- It does not just tell the story of what has happened. Its narrative also uncovers the story of how we know what has happened, happened by featuring many of the key scientists, historians and archaeologists whose discoveries have led to our modern understanding of the past. Therefore, What on Earth Happened? should be considered the ultimate, essential, up-to-date narrative history guide book for the general public for anyone aged 9- 90.

Christopher Lloyd has had a broad and comprehensive career both as a journalist and as a general manager in the education business. After graduating with a double first class degree in history from Peterhouse, Cambridge in 1991, he helped research the personal memoirs of the ex Sunday Telegraph Editor and journalist Sir Peregrine Worsthorne. He then became a graduate trainee journalist on The Sunday Times newspaper and was trained at the City University where he gained a diploma in newspaper journalism.After two years as a news reporter, he began a new column in The Sunday Times Review sect...
More about Christopher Lloyd