Gigolo: Inside the Secret World of the Super Rich
Clifford Thurlow, Ben Foster 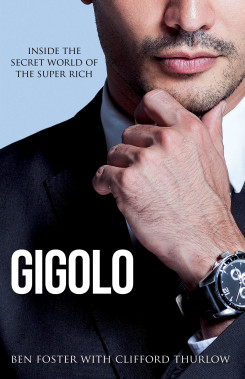 Ben Foster works double shifts for the minimum wage at a care home for boys with learning disabilities. With a young wife and three children under the age of five, he is ground down by poverty and debt.

Sturdy, hard-working, a former trawler-man, he uses the small inheritance from his Gran to qualify as a masseur and acquires one client, Rufus, whom he meets while giving free massages for a gym membership. Rufus’s mother, Lady Catherine, is a member of what is mysteriously called the Committee, a group of society ladies who have one thing in common: they adore sex and don’t mind paying for it.

As a well paid gigolo, Ben’s bank account swells and he acquires a taste for the good life, while his wife, Kelly, is both suspicious that Ben provides more than just massage to his wealthy patrons and is being drawn into a world that will eventually destroy him. And she’s right.

Two years after starting work at the spa, Ben loses his job and Kelly catches him in flagrante with a client. The women whom he thinks of as friends stop answering his calls. His mortgages on two buy-to-rent flats go up beyond his means. The 2008 bank crisis leaves him bankrupt and back working again at the care home.

Ben Foster works in a care home for young adults with learning disabilities. He is a qualified practitioner of reflexology and used to be a famous masseur.
More about Ben Foster