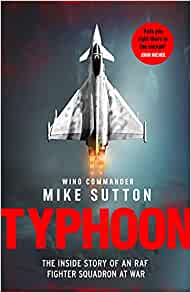 From their scruffy base in Cyprus, Sutton as the Boss of 1 (Fighter) Squadron – the oldest most prestigious squadron in the RAF – leads his team of 15 Typhoon fast jet pilots on hundreds of precision strikes in five months of round-the-clock operations.

With the constant danger of mid-air refuelling, ground-to-air missiles and the lurking threat of Russian aircraft, 1 (Fighter) Squadron obliterates strategic targets including bomb factories, takes out snipers, chases vehicle borne IEDs and protects ground troops often outnumbered by jihadi fighters. In one savage battle, Sutton carries out the first and only strafing attack by a Typhoon jet.

Sutton brings acute analysis of the fighter pilot’s role in modern warfare and straps the reader into an ejection seat on perilous missions to protect civilians against a brutal regime killing everything in its path.

In Typhoon, Sutton explores the themes of leadership, the strains on family life, the normalisation of extreme violence and the harrowing effects of operations. He reveals the intimate inner workings of his squadron, the camaraderie during conflict and how he struggles against bureaucracy to maintain the rhythm, zeal and confidence required of pilots in combat.

Awarded the OBE in 2017, the leader of a twenty-nine aircraft Queen’s Birthday Flypast, Mike Sutton takes us on a gripping journey through his early career, from failing to be accepted in the RAF, scrambling a Typhoon against a potential hijacking and the ultimate test: leading a fighter squadron to war. 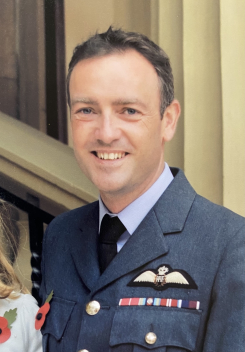 Mike Sutton led the RAF’s legendary 1(Fighter) Squadron into action against ISIS in 2015 and conducted what remains the first and only gun attack by a Typhoon against the enemy. An RAF fighter pilot for 18 years, he flew the Jaguar low level strike jet before becoming an instructor on the first RAF Typhoon multi-role attack squadron. During his time as a tactics instructor he conducted a live scramble in response to a potential terrorist hijacking, introduced new precision weapons to the RAF frontline and served on operations in Afghanistan, Iraq and Syria. He left the RAF as a Wing C...
More about Mike Sutton