Devilfish: The life and times of a poker legend
Dave ‘Devilfish’ Ulliott 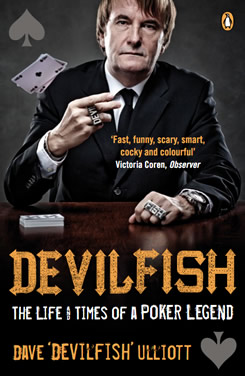 The extraordinary life of Dave ‘Devilfish’ Ulliott - the man who most symbolises poker’s amazing reinvention from shadowy disreputability to shining, global success - told in his own words.

Britain, and Europe’s, most famous and successful poker player has had a lifetime of extremes, which he illustrates with stories from his life: from a tough working-class childhood on a council estate in Hull to now living in a large detached house with a Ferrari in the four-car garage; from playing backstreet poker games in Northern towns to now being a high-roller in the best casinos from Vegas to Vienna; from attending illegal poker games as a young man with a gun in his pocket to now playing at international high-roller tournaments at The Bellagio in Las Vegas; from playing cards with gypsies, gangsters and thieves to now playing with Holly-wood poker elite such as Matt Damon, Ben Affleck, Jennifer Tilly and his friend, the actor James Woods. And from a prison cell in Leeds to a 5-star luxury suite in a Mississippi casino.

Son of a paratrooper, Dave Ulliott first went into a betting shop with his father and, winning on his very first bet, he has been gambling ever since. And gambling not only with money - during his teens and early twenties he was a boxer, a bouncer, and he ran with local villains and became part of a safe-cracking team that saw him spend his 21st birthday in Armley prison before being transferred to Durham, one of the country’s toughest jails.

Along the way, Ulliott’s ride through his own life has seen him experience not only the ups and downs of any professional gambler’s life - the financial wipe-outs, the emotional debts and personal costs to his wives and family- but also seen his eventual success mirror that of the extraordinary rise of poker as the world’s most popular, and profitable, game. Whereas many of his earlier gambling friends have fallen by the wayside, Devilfish is one of the very few to not only survive but prosper from his poker skills.

Often talked about and often written about by other players, writers and gambling commentators, here for the first time, Devilfish tells his full story in his own way: how in 1997 he stormed the World Series of Poker in Vegas for the first time, won a coveted gold bracelet and came home with $750,000 cash in duty-free bags; and how in winning Channel 4’s inaugural Late Night Poker tournament he became part of the programme that changed the nature of poker forever, leading to its immense growth and current status.

Banned from every bookies in Britain because of his betting success, Ulliott is now in the rarefied stratosphere of bona fide poker royalty. Finally, he opens up with a rare look into his life, his poker career and observations and insights on poker playing and gambling success and failure.

Devilfish - half sarky, laid-back Englishman, half Wild West, take-no-prisoners river gambler: his story is the kind of gambling narrative the likes of which we will not see again. And his story, which straddles both worlds of Old School gambling danger and new century post-Internet poker boom, is an unusual and rare bridge between the two. Not many have even stood on that bridge and even less have crossed it: there stands Dave ‘Devilfish’ Ulliott. 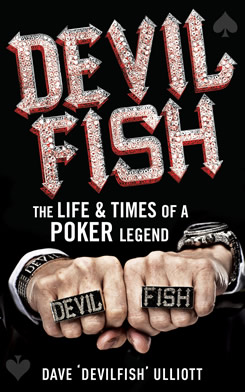 European Poker player of the Year 2007, Dave Ulliott, or ‘Devilfish’ as he is more commonly known, is Britain (and mainland Europe’s) most famous and successful poker player. From a tough childhood in Hull, Ulliott’s journey has seen him spend time as a boxer, a bouncer, a safe-cracker, pawn broker and a gambler before becoming one of the world’s most successful and recognisable professional poker players, and with winnings of over £5million. He was ranked no.9 in Poker Player Magazine's Top 10 Poker Legends List. He was the inaugural winner of Channel 4&...
More about Dave ‘Devilfish’ Ulliott