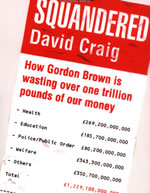 During Gordon Brown’s ten years as Chancellor, he boosted the amount of our money being spent on public services by a massive 50%. The supposedly ‘prudent’ Chancellor pumped up public spending by close to a trillion pounds - that’s £1,000,000,000,000 of our taxes – over £15,000 for every man, woman and child in the country. This tsunami of extra cash poured into the Government’s attempts to improve health, education, policing, defence, social services and public administration.

But what have we got for our money? Effective and responsive public services that are the envy of the world? Or the creation of a vast, self-serving bureaucracy that has presided over the greatest waste of money in British history?

Of course, with so much money being thrown at public services, there have been some successes. But overall, the results of Brown’s tidal wave of extra spending have been worse than pitiful. In department after department, we have seen the same sorry story – a triple whammy of incompetence, cover-up and cuts that have decimated public services, while those responsible have lavished money and honours on themselves.

In The Triumph of Incompetence we expose the sometimes tragic, sometimes comic story of how Gordon’s Brown’s ten years of mismanagement have squandered almost unimaginable amounts of our money, caused irreparable damage to our public services and rewarded the man responsible with the keys to Number 10.

For over 20 years, David Craig has worked for and competed against some of the world's best and worst management consultancies. He has sold consulting in 15 countries in Europe, US and Asia to almost 100 organizations, including Disney, Mobil, Dupont, Roche, Air France, Eurotunnel, The NHS, CapGemini, Unilever and many others. He is the author of four other books on management and organizations
More about David Craig