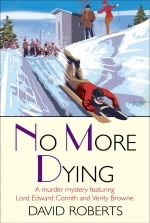 It is February 1939 and Lord Edward Corinth embarks on his most important investigation. It is clear that Britain will soon be at war. Prime Minister Neville Chamberlain’s policy of appeasing Hitler has failed. The nation looks to Winston Churchill whose years in the wilderness warning of the catastrophe to come are about to end. However, MI5 learns that an enemy agent has been dispatched to England to assassinate him. The assassin’s identity is unknown and Lord Edward Corinth, pursuing one line of inquiry, goes to Cliveden, the Astors’ country house in Buckinghamshire renowned as the headquarters of those who are prepared to go to any lengths to avert war.

Verity Browne also goes to Cliveden, much as she despises the so-called Cliveden Set. She has been ordered by her superiors in the Communist Party to get as close as possible to one of the Astors’ guests, Joseph Kennedy, the American Ambassador, who is convinced that Britain can never win a war against militant Germany.

When the Ambassador’s sons, Joe and Jack Kennedy, discover the body of a man in Cliveden’s Blenheim Pavilion, Verity, to her dismay, recognises the dead man as a journalist colleague and a former comrade-in-arms in the Civil War that still rages in Spain.

The race against time to identify Churchill’s assassin and the murderer of her friend takes the intrepid duo to Switzerland and a nail-biting climax on St Moritz’s icy Cresta Run.