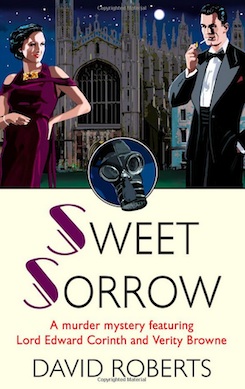 August 1939, the last hot days of a perfect English summer – war is now certain, this week, next week . . . soon. Lord Edward Corinth, newly married, is determined to spend these last days of peace quietly with Verity in their new house, The Old Vicarage, in the sleepy Sussex village of Rodmell – a honeymoon of sorts. Fight against it as he might, for Edward it turns out to be a busman’s holiday. The poet, Byron Gates is murdered after the village fete, or rather, not just murdered but executed, his head chopped off on a wooden block.

Virginia and Leonard Woolf, have brought to the village refugees from a world turned upside down – Mrs Brendel, Verity’s housekeeper, her old friend the novelist, Charlotte Hassel and her painter husband, Mark Redel another painter disappointed and disillusioned, the old soldier Colonel Heron and several more to form an artist’s colony of sorts.

Alas, murder is not yet done with Verity and Edward. Even in the hallowed studios of Broadcasting House, murder dares to rear its ugly head while Verity is being interviewed about her interesting life.

Before she can take up her foreign posting, reporting on the international crisis for the New Gazette, there are more deaths and the intrepid couple embark on one of their most dangerous investigations culminating in a desperate night-time ascent of King’s College Chapel, Cambridge.