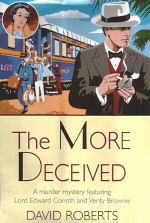 1937. Much to the government's embarrassment Winston Churchill has been receiving unauthorized information on the perilous state of Britain's rearmament programme and so Lord Edward Corinth is brought in by the Foreign Office to investigate the leaks. But Edward rapidly falls under Churchill's spell and quickly abandons his investigation to concentrate instead on finding the murderer of a Foreign Office official who may have been one of Churchill's sources. He soon finds himself trying to untangle a web of intrigue and deception which threatens the security of the state.

And then there is a second murder within the Foreign Office and Edward sets out for Spain to find the murdered man's son, though his real objective is to satisfy a gnawing fear that his friend Verity Browne is in extreme peril. Verity is reporting on the Civil War for the New Gazette and she scents a scoop when she is given secret information that the enemy is planning an attack on the undefended town of Guernica.With Edward in tow she arrives just in time to witness a barbarous aerial bombardment on a civilian population with no means of defending itself.

Back in England, Edward is faced with death once again - this time at Brooklands in Surrey, where the world's fastest women race against the odds, reckless of danger and in love with speed. This is an enthralling mystery set in a glamorous and turbulent period of history.