The Quality of Mercy
David Roberts 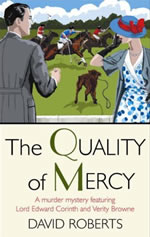 Lord Edward Corinth finds that his old school friend the Maharaja of Batiala is staying with the Mountbattens at Broadlands, their estate not far from Mersham Castle. The Duke, Edward’s brother, dislikes Lord Mountbatten whose love of fast cars, fast women and publicity is anathema to him. However, when Edward and his nephew are invited to lunch at Broadlands, Frank loves everything about the place. Mountbatten approves his decision to volunteer for the Royal Navy and begins to teach him polo - his favourite sport.

Frank’s enthusiasm for polo is all the more fervent for finding that the Maharaja’s beautiful daughter Sunita is also a keen player. However, during Frank’s first polo match, a man is found murdered in the stables – kicked to death by a polo pony. He is a Jewish refugee, Georg Dreiser, whom Verity had helped escape the Nazis at the Anschluss – Hitler’s annexation of Austria. Verity, too, as a Communist, has to leave Vienna and wait impatiently in England for a new assignment.

Another death on Mountbatten’s estate complicates matters. The dead man is a painter, Peter Gray, who has been poisoned. Edward and Verity decide to investigate Gray’s death which might be due to an accidental overdose of ergot, the medicine he takes to ward off his depression, or murder.

It is March 1938 and war seems inevitable. In these tense days Verity begins to appreciate that, after all, Edward may be the man with whom she could spend the rest of her life. She is becoming disillusioned with Communism and when she meets Edward’s hero, Winston Churchill, he does not seem quite the ogre she thought him to be.

In this classic investigation, Verity and Edward find that death comes more often than not to the innocent and many lives are left to the mercy of strangers.