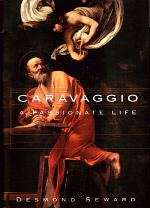 The greatest painter of the Italian Baroque, Caravaggio was also a quicktempered, murderous swordsman. Few artists have had a police record like his. When painting, however, he became a mystic. The models for his Virgins and his saints were prostitutes, but his pictures are deeply spiritual.

At the height of his fame, just after painting the Pope's portrait, Caravaggio killed a man in a duel and had to hide for his life in the wild hills outside Rome. Outlawed, he became a Knight of Malta but, for half-killing a fellow knight in another duel, was thrown into a dungeon from which he escaped, leaping over the prison walls with a rope. After fleeing along the coast of Sicily on small boats, pursued by a nameless enemy, he was caught in a Neapolitan brothel by his enemy fs assassins and left for dead, so disfigured by sword cuts that he was unrecognisable. Trying to return to Rome, he was shipwrecked, mistaken for a notorious bandit and arrested, before dying on a Tuscan beach in mysterious circumstances when he was still only thirty-eight. All this time he had been painting furiously, in cellars by lamp light, pictures that are masterpieces. Some must still await rediscovery.

Was Caravaggio a homosexual, whose religious scenes are secretly suffused with homoeroticism? What were the causes of his self-destructive binges and endless brawling? Did the Knights of Malta murder him? Just where did he die and where was he buried? Making use of very recent discoveries in Italy and elsewhere, Desmond Seward answers these questions.

His book is at the same time a gripping adventure story and a study of a moody, violent genius, playing dramatically on the contrast between wonderfully creative art and a vicious private life. It uses both the pictures and contemporary crime reports to peer into Caravaggio fs mind.

Desmond Seward was born in Paris and educated at Ampleforth and St Catharine's College, Cambridge. He is the author of many books including The Monks of War: The Military Religious Orders, The Hundred Years War, The Wars of the Roses, Eleanor of Aquitaine and Henry V as Warlord, Josephus, Masada and the Fall of Judaea (da Capo, US, April 2009), Wings over the Desert: in action with an RFC pilot in Palestine 1916-18 (Haynes Military, July 2009) and Old Puglia: A Portrait of South Eastern Italy (Haus August 2009). Forthcoming is The Last White Rose: the Spectre at the Tudor Court 1485-1547 (C...
More about Desmond Seward