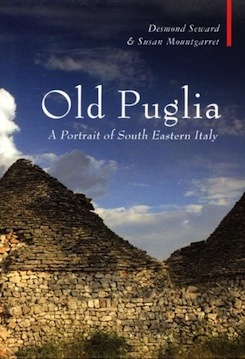 Puglia (Apulia) has suddenly become fashionable among Anglo-Saxons, an alternative to Tuscany. But to understand it properly you have to know its history, which is altogether different from that of mainstream Italy. Here is the first general history in either English or Italian of a region

Travel guides list castles and cathedrals, Romanesque and Baroque architecture, but ignore all the wonderful ghosts - Emperor Frederick II, King Manfred, Raimondello del Balzo Orsini, Maria of Lecce, Il Guercio ('The Squinter'), Paolo di Ribeco (Bari's Masaniello) or the brigand hero Sergeant Romano. Nor do they tell us about the colourful life at the little feudal courts, the labour gangs' grim existence on the Tavoliere, the saints and the black magic of the Gargano, or the terrible 'Brigands War' in the 1860s, or what was the real purpose of a masseria, a trullo, an underground city or a cave church, and why these came into existence.

This book fills a very much needed gap, bringing Puglia and its people alive through using accounts by earlier travellers down the ages, and following in their footsteps - to link landscape and history.

Desmond Seward was born in Paris and educated at Ampleforth and St Catharine's College, Cambridge. He is the author of many books including The Monks of War: The Military Religious Orders, The Hundred Years War, The Wars of the Roses, Eleanor of Aquitaine and Henry V as Warlord, Josephus, Masada and the Fall of Judaea (da Capo, US, April 2009), Wings over the Desert: in action with an RFC pilot in Palestine 1916-18 (Haynes Military, July 2009) and Old Puglia: A Portrait of South Eastern Italy (Haus August 2009). Forthcoming is The Last White Rose: the Spectre at the Tudor Court 1485-1547 (C...
More about Desmond Seward