On Duty with the Queen.
Dickie Arbiter, Lynne Barrett-Lee 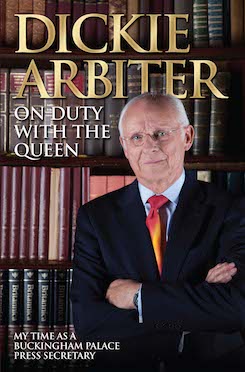 On Duty with the Queen is Dickie’s memoir of an intense dozen years, travelling the globe with what he fondly referred to as ‘the double act’, witnessing the ‘Diana Effect’ in action, and being at the epicentre of palace affairs.  It’s a candid look behind some of the most salacious and sensational Royal news stories of those days, from the perspective of someone who was not only there, but who had also long experience of the monarchy and its history, having first become a royal reporter for the first commercial radio station, LBC, as far back as The Queen’s Silver Jubilee.

From that poignant moment when the world saw Diana alone at the Taj Mahal, through the AIDS tour, the marital breakdown, the publication of THAT book, Dickie’s memoir offers a rare glimpse into the truth behind the often inaccurate headlines, as well as a personal view of the relationships and personalities that the public weren’t privileged to see.

But Charles and Diana weren’t the only source of news within that period. The Queen herself went through some difficult, harrowing times – and very publicly - from scrutiny over her personal finances, to embarrassment over the revelations surrounding her daughter-in-law, Sarah Ferguson, to the distress of seeing part of her beloved Windsor castle reduced to cinders.

Then came the death that shook the world, along with the seven distressing days after it, during which Dickie’s job was to handle a global media storm the like of which had never been seen before. Never had The Queen herself been so criticised. Loved she might have been, but her decision to remain at Balmoral with her grandsons saw her pilloried by a press that saw it as a dereliction of her royal duty.

History eventually saw things differently.  And, as with many other Royal news reports accepted first as gospel, Dickie shines a spotlight on the complicated, often acrimonious, but sometimes surprisingly harmonious relationship our monarchy has with the media, and examines the changing role of both in our modern society.

Mostly, however, this is a deeply personal memoir, both about the man himself (by his own admission, perhaps the most unlikely of Royal employees) about a fascinating career reporting on and working for the monarchy, and about the relationships between the members of our cherished - and, from time to time, less-than-cherished - Royal Family, including a few previously unknown revelations.

DIckie retired from the Palace Press Office in September 2000, aged 60, and is now globally recognised  - and much in demand - as the leading Royal Commentator in the UK. He is still reporting, and lecturing on Royal matters around the world.

He has quite a story to tell.  This is it. 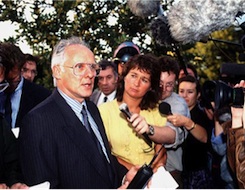 As a former Press Secretary to Queen Elizabeth II and media manager for Prince Charles and the late Princess Diana, Dickie Arbiter has had unprecedented access to some of the most notable figures of our time. With almost five decades of experience covering royalty as a broadcaster, journalist and Royal Press Secretary, he is regarded as one of the most knowledgeable and sought-after experts on the British Monarchy working today. He is seen regulary on the BBC, ITV, C4, C5 and Sky  in the UK and he appears around the world only literally all the major news networks inclu...
More about Dickie Arbiter,