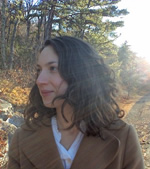 Born and raised in Upstate New York, Dinah Roe was educated at Vassar College. Her third year at university was spent at Oxford, where she developed an interest in nineteenth century literature that led her back to the United Kingdom for post-graduate study. Funded by the Overseas Research Scholarship award, she received her PhD. in English Literature from University College London in 2004. Having relocated to London, she divides her time between university lecturing and her own writing.

She has also written reviews, interviews and features for London’s Hampstead and Highgate Express. Dinah also does some freelance writing, for example contributing entries to Books: A Century of the Greatest Books, Writers, Characters, Passages and Events that Rocked the Literary World (Cassell Illustrated, 2007).

She has been resident in London for over ten years, after which time, she understands, even someone born across the pond can be proud to call herself a Londoner.

I asked a friend in publishing to recommend somone, and he suggested Andrew Lownie. He told me that Mr. Lownie was well-connected and had a reputation for professionalism, but was also known for courtesy and sensitivity to authors. I was pleasantly surprised at his prompt responses to my emails and queries, and am very excited to be working with him.