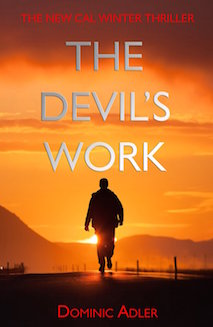 Cal Winter, Iraq veteran and reluctant assassin, serves an underground organisation known only as The Firm.

Summoned to London for an urgent briefing, he is waylaid by MI6 trouble-shooter Marcus. MI6 have hired The Firm to rescue an agent held in a high-security African prison. And when he discovers the operation is threatened by a mole working for Chinese intelligence, Marcus orders Cal to unmask and eliminate the traitor.

In London Cal meets MI6 officer Juliet Easter and deniable asset Tom Dancer, a former officer in Cal’s old regiment. The hostage, security contractor Mel Murray, is held in Zambute, a failing East African state propped up by Beijing. Murray was working covertly for MI6 to disrupt Chinese politicking in the region: if he reveals MI6’s plan under torture, British rapprochement with China might falter, with disastrous political and economic consequences.

Cal’s team of mercenaries, battle-hardened from the Wars on Terror, fly to Kenya to prepare for a high-risk hostage rescue. As the clock counts down towards the assault, Cal discovers another game being played inside the MI6 team: any one of the four agents has a possible motive for betrayal. With the clock ticking, Cal finds himself running a counter-espionage operation in the field, spying on spies.

When the rescue operation is compromised by Chinese Special Forces, Cal’s team goes on the run. Cal fights a bloody, rolling battle across the war-torn wasteland to complete his mission, unmask the traitor and get out alive.

He discovers Zambute is an unforgiving place, a killing zone ruled by terrorism, dictatorship and greed. And as he gets closer to identifying the traitor, Cal finds himself under threat from The Firm itself as MI6’s operation implodes. A dirty endgame of betrayal and murder is laid bare, played out between corrupt spies, mercenaries and warlords…

A native Londoner, after completing a degree in history Dominic began a career in law enforcement. He went on to serve for twenty years in a variety of roles.Dominic was previously a member of the army reserve, including service in the Intelligence Corps. This led to a keen interest in military history, defence matters and politics. He is particularly interested in the politics and ethics of Private Security Companies – the polite 21st Century commercial term for mercenaries. This, along with a life-long passion for hard-boiled action thrillers, has shaped his writing.Dominic’s ...
More about Dominic Adler