Man at the Door
Duncan Robertson

At 2.30pm, March 8th 2013, David Jeffs enters a Mayfair apartment block in London for a meeting with a long-standing client. CCTV shows him leaving fifteen minutes later looking much the same as when he went in. At 4pm, American socialite Robert Troyan is found brutally bludgeoned to death in his flat by his cleaner.

The very next day detectives drive up to arrest his financial advisor, David – the only suspect in the case. Nine months later, David is sentenced to 22 years in prison for murder, still protesting his innocence.

What if David is telling the truth?

In 2014, his friend and journalist Duncan Robertson re-examines the case to settle this question once and for all.

Man at the Door is a forensic examination of the police investigation, trial, and the appeal system. It shatters the misconception that David was the only suspect and highlights the flaws in the police investigation as a whole. At the heart of the book is the riddle of Robert Troyan himself, a charming lonely socialite who left the door open for visitors day and night. He consorted with drug dealers, rent boys and career criminals in the weeks before his death who knew he was expecting delivery of a large amount of cash on the day he died. And when Robert’s cleaner comes under suspicion it is clear nothing about this story can be taken for granted.

Readers become the thirteenth juror as they decide whether David should be found guilty on the evidence, or if the real killer may still be out there. Through the twists and turns of this murder mystery, it becomes clear that truth does not reside in the facts but in the way in which they are presented. 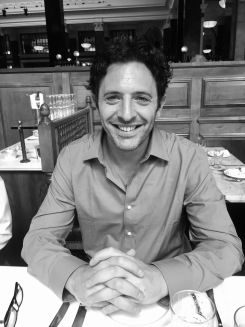 Duncan Robertson is a freelance investigative journalist.   After graduating from Warwick University with a First in English Literature, he cut his teeth as a news reporter on The Sentinel in Stoke-on-Trent and then moved to the Daily Mail in London where he worked on some of the biggest crime stories of the day - including the Alex Litvinenko assassination, Amanda Knox mystery and the faked death of John Darwin. He also spent six months investigating the knotty problem of London gang crime.   Man at the Door, a True Crime investigation into the death of Mayfair socialite Robe...
More about Duncan Robertson