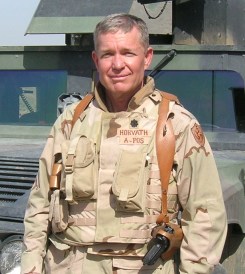 Colonel Edward Horvath is a veteran of the U.S. Army Reserve Medical Corps, having served three deployments in Iraq. He has been a physician for more than 45 years. During his last deployment in 2011, Col. Horvath was Task Force Deputy Commander and Chief of Clinical Services for a combat support hospital near Tikrit, Iraq and was responsible for the medical care of over 20,000 U.S. soldiers in the northern half of Iraq. Earlier at the same base, he staffed the emergency room and outpatient clinic, caring for U.S. soldiers, Iraqi civilians and enemy combatants.

Horvath first went to war in Operation Iraqi Freedom in 2004 at age 59, after a 26-year break in military service, having served as a U.S. Navy officer earlier in his career. He returned to the military, in part, inspired by his two sons, who both joined the Navy following 9/11. During his first deployment, he served as Chief of Clinical Services at a hospital, which was within a sprawling detention complex later recognized as the birthplace of ISIS. Col. Horvath was also stationed at the infamous Abu Ghraib prison hospital and in Baghdad on special assignment.

For his actions in Iraq, Col. Horvath was awarded the Bronze Star Medal and later received one of the nation’s highest military honors, the Legion of Merit. He currently serves as a primary care physician at the Veterans Affairs Medical Center in Cleveland.

Previously, Horvath held positions at top medical centers including the Cleveland Clinic. He also served as Medical Director for major corporations such as General Electric and BP America. He has authored more than 30 medical publications and was co-editor of a major textbook, “Occupational Medicine.” He has been married to his wife, Joy, for 44 years, and they have three children.

I received a resounding recommendation for Andrew Lownie from a fellow non-fiction writer, who’d been represented by Andrew in the military genre. She told me that Andrew regularly ranks as one of the top literary agents in the world for non-fiction—and that he especially likes the military genre. Based on that recommendation, I really didn’t feel like I needed to look any further.