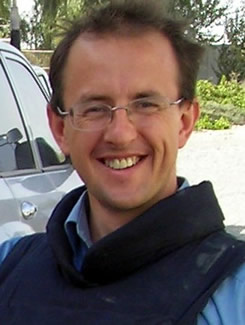 In fifteen years as a military intelligence officer, Frank Ledwidge served front line operational tours in Bosnia, Kosovo and Iraq - the latter as head of one of the joint-service multinational teams failing to find WMD. He was subsequently selected to head his service specialisation for two years. He is a graduate of the Joint Service Command and Staff College and has worked closely with US and other NATO forces including taking and passing the US Marine Counter-intelligence Course. He retired from the service in early 2009.

In his civilian life he is a Barrister. He has worked for many years throughout the Balkans, the Former Soviet Union and Africa in the field of conflict prevention for the Organisation for Security and Co-operation in Europe and the British government. In 2007 he combined his military and civilian roles as the first civilian Justice Advisor to the UK Task Force in Helmand. Frank also served in a similar capacity in Libya.

He is a  regular commentator on military affairs on UK and international TV, radio and print media,  including BBC1, BBC Radio 4, Al Jazeera, Sky News, Channel 4, the Guardian, the Times, and the New Statesman.

His best-selling book 'Losing Small Wars' was selected by the Times and Amazon as one of the 'Books of the Year' in 2011.  'Investment in Blood', published in 2013, detailing the costs of the Afghan War made front-page news worldwide.

I'n 2017 Frank Published a second edition of 'Losing Small Wars' which is now  established as one of the leading books on the UK's involvement in the 9/11 Wars. He also produced 'Rebel Law', a study of insurgent courts which has been uniformly well-reviewed.

In 2018, his 'Aerial Warfare' was described by one leading US historian as 'a fantastic introduction to war in the air' and 'one of the great air power textbooks for the foreseeable future'.  In July 2018 it was selected as one of the ten best military books of the RAF's centenary 'Chief of the Air Staff's reading list'. This was the second time that Frank has been included on the RAF's annual list of the ten best military books of the year, with 'Losing Small Wars' gaining that honour in 2011

I came to Andrew Lownie through a military friend. He had gone to Andrew with an idea for a novel. He was very impressed, as I have been, with the approach Andrew took and the care and courtesy with which he was treated.