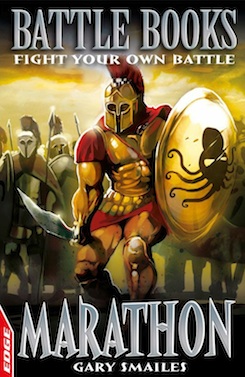 Battle Battles is a range of children’s history books with a twist. Author Gary Smailes has written the books he wanted to read as a 12-year of boy. In each title you assume the role of a different commander, guiding their army through a famous historical battle. By using the ‘choose-your-own-adventure’ style interactive narrative, readers are able to re-write history and re-fight the battles form the comfort of their own armchair.

The books are aimed at the 9-12 year old readers and are published by Franklin Watts. The books appeal directly to the traditional Horrible Histories market and Horrible Histories author Terry Deary is providing a forward for the series. The initial battles examines are Hastings, Arnhem, Iwo Jima and Marathon.

It is 1066, and Harold Godwinson has been crowned King of England. A mighty army has journeyed from Normandy, Breton and France to crush Harold’s forces at what will become remembered as the Battle of Hastings.

You are William the Conqueror, Duke of Normandy and leader of one of the largest invasion forces ever. You must command your army and position your forces to defeat the English, and claim the crown that is rightfully yours...

It is 1944 and Europe is still in the iron claw of Nazi German forces. In an attempt to end the war, British leaders have a plan to send elite troops deep behind German defences to capture key targets, including bridges.

You are a Lieutenant in the 2nd Parachute Battalion. You must command your men forwards through enemy territory and reach the bridge in the Dutch town of Arnhem. You must hold the bridge at all costs...

Do you have honour, courage and valour?

Then get ready to fight your own battle!

of kings and endless lists of dates. Yawn. But exciting history asks: How

did people live and how did they die? How did they feel? Were they just like

us or more like aliens from another planet? Those are the questions that

Battlebooks explore. I wish Gary Smailes and his books had been around when

I went to school."Quote for the back cover: "History does not get any more exciting than

Terry Dearym quote for the back cover: "History does not get any more exciting than this." 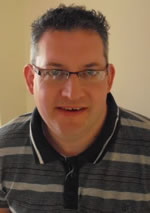 Gary Smailes started his working career as a biologist, but gave up a promising career as a researcher in the pharmaceutical industry to follow his passion for history. After obtaining an MA in Military History from Liverpool University, Gary spent a number of years as a historical researcher for the Horrible Histories writer Terry Deary and as a freelance researcher and editor, before setting up BubbleCow, a literary consultancy that provides editorial services to writers.Gary now splits his time between writing and advising new authors on the best route to publication He works from his...
More about Gary Smailes