To Fight Alongside Friends: The Great War Diaries of Charlie May
Gerry Harrison 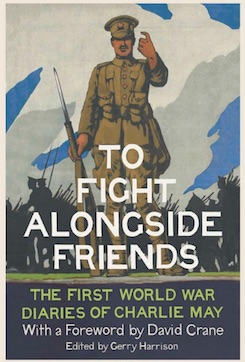 The writer and journalist, Charlie May, was killed on 1 July, 1916, the first day of the Battle of the Somme.   His diaries, which were written in pencil in seven wallet-sized pocket books, sometimes in damp, muddy trenches while under attack, were discovered in an attic in the 1980s.   They were regarded with such interest, because of their heart-felt dedication to his wife and baby daughter, the honesty of his personal thoughts and the power of his writing, that short extracts were featured in an exhibition, ''In Memoriam'', at the Imperial War Museum in 2008, to mark the 90th anniversary of the 1918 Armistice.   Next year will be the centenary of the outbreak of this War.

Originally from New Zealand, Captain Charlie May obtained his commission in the 22nd Battalion of the Manchester Regiment, also known as the 7th Manchester 'Pals'.  He sailed to France with a sense of optimism, but was one of 19,240 British  soldiers who never survived that day.   Two hours before he was killed, he wrote, ''I trust they will not claim too many of our lads before the day is over.''

Often using the spontaneous vernacular of the time and allowing his sense of humour to intrude, he was also aware that his diaries may one day be published, so his words sometimes assume a more literary  tone.    He avoids many of the clichés of war diaries, and includes descriptions of battalion football matches, horse-rides along the Somme valley, afternoons with a fishing-rod, lunch in Amiens, a gastronomic celebration of Christmas and a concert in Whiz Bang Hall.

Without restraint, he gives revealing pen portraits of colleagues and voices his disdain of certain senior officers.   Although he despises the Bosche and their commanders, he writes of his respect for the German dead: ''I have a little bay too”.   Threading through his narrative are his detailed battles with rats and mud, but he includes the incompetences and the heroics that lead up to this vital battle.

On June 18, two weeks before he dies, Charlie May writes, ''But it is the thought that we may be cut off from each other which is so terrible and that our babe may grow up without my knowing her and without her knowing me.    It is difficult to face.    And I know your life without me would be a dull blank.    Yet you must never let it become wholly so. For to you will be left the greatest charge in all the world; the upbringing of our baby.   God bless that child, she is the hope of life to me.   My darling, au revoir.'' 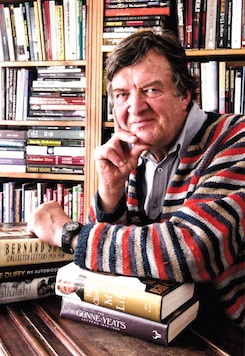 I was born in India, and grew up in England and Ireland.  In the 1990's I inherited the war diaries of Captain Charlie May, who was my great-uncle.   While the original diaries were deposited in the archives of the Manchester Regiment, the transcripts of these diaries are now in the Imperial War Museum.  They are not simply accounts of mud and blood on the Western Front, but were an uncensored opportunity for Charlie to express his view of the world and the people around him.  I am very fortunate that Andrew was able to place his diaries with Harper Collins.  ...
More about Gerry Harrison