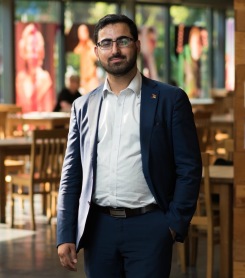 Gulwali Passarlay is an advocate, humanitarian and spokesperson for refugees and asylum seekers across the U.K.

Since arriving in the UK in 2007 after being forced to leave Afghanistan as a 12 year old boy, he has been a political campaigner for refugee’s rights, social justice and education. The experience of his journey to the UK shaped his future and inspired an insatiable determination and commitment to raise awareness and make a difference for other refugees.

In his talks, shares his story of struggle, danger and resilience and how he miraculously survived the harrowing year long journey from Afghanistan to the UK, on his own, after being separated from his brother. Through his talks, audience’s young and old, are able to achieve an understanding of the extent of adversity that refugees face and thus be inspired to instigate positive change in their environments.