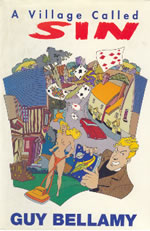 Compton Sinbury is the idyllic village that you just miss when you are careering down the M3. Nestling in a dip below rising cornfields, its village green and gently meandering river make it a favourite destination for photographers who have been assigned to capture the essence of rural England.

But the people who choose to live there, anxious to escape the dirt, the noise and the bustle of urban decay, find that life’s problems ignore geographical boundaries.

While Paul Vanner commutes to a six-figure salary in the city, his wife discovers a new hobby: drinking. Reporter Harry Grant, who covers the village for the county newspaper, gazes out of his cottage window at the little girl nobody knows is his daughter, and small-time property developer Toby Beauchamp discover that bribing the planning officer to get permission to build is a difficult activity to keep secret.

The vicar, Owen Gray, has problems too. The fact that he has ceased to believe in God is a professional handicap that he can smoothly surmount, but his lust for his beautiful sister Cathy is harder to ignore. After all, as teenagers they had a very special relationship. Cathy is an uninhibited soul who likes to mow the lawn in the nude if the sun is shining, a habit that gives her neighbour the biggest idea he has ever had.

Meanwhile in his disgracefully dirty bungalow sixty-six-year-old Barnaby Barton dreams of the pregnant girlfriend who deserted him forty-eight years ago…No wonder the locals abbreviate the village name to Sin.