In the Midday Sun
Guy Bellamy 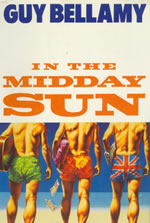 In the bath one morning Daniel Ward works out how to take £1 million from the local banks without the use of violence. He has always been addicted to puzzles. But, with the money in his hold-all, he thinks it best to leave the country before anybody discovers how he did it. BY that evening he is looking for a villa in the hills behind Marbella, on Spain’s so-called Costa del Crime.

His brother, Matthew, is a successful businessma who has built up a firm worth millions of pounds. Bt after an unfortunate incident with a girlfriend he is reported to the Inland Revenue by his furious wife, who tells them that he has been lying for years. With his bank accounts frozen and warrants out for his arrest – for tax evasion, which they call criminal fraud, and contempt of court – Matthew gets hold of what money he can, stitches it into a pillow and leaves the country in an old car with his girl and a false passport. Soon he is in southern Spain as well. There they run into their third brother, Mark, a penniless pianist now singing for his supper in the tourist bars.

A summer in the sun. But for the fugitive on the Costa del Sol, life isn’t all champagne and sangria. While thousands of people in cloudy Britain pore over glossy brochures designed to lure them to Spain, homesick Daniel sits on the marble patio of his luxurious home studying Spanish brochures that urge travellers to head for Britain. Matthew has his problems too, including a pregnant girlfriend. But for pianist Mark things start to look up.