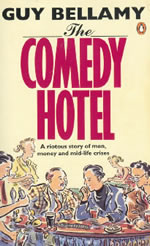 Max Hadfield is surprised to learn that his voluptuous wife is expecting a baby. After all, he has secretly had a vasectomy. This is just the first of a series of blows that start to rain upon him. His chain of dress shops that was intended to lift him to the heights of prosperity that he had always dreamed about is feeling the chill winds of recession, and his teenage son has decided to make a mysterious trip to Spain instead of launching himself on the career that his parents expected.

‘Life is a tease,’ Max decides, ‘a series of receding targets designed to keep you on the move, like a laboratory experiment with rats.’

His two drinking companions , Alec, a headmaster, and Laurie, a swashbuckling businessman, also find that middle age doesn’t bring peace. Alec for years has secretly being living in sin; putting the matter right doesn’t bring its expected happiness. And Laurie is married to an aggressive lady who thinks nothing of clipping off his moustache while he sleeps, or serving him a dog-food omelette.

Worst of all, the three of them discover that the years spent being devoted parents have not produced the fine young offspring that they had set their hearts on. So what can the future hold for Max, with a child of unknown provenance on the way?

At least there is always the solace of the Comedy Hotel.